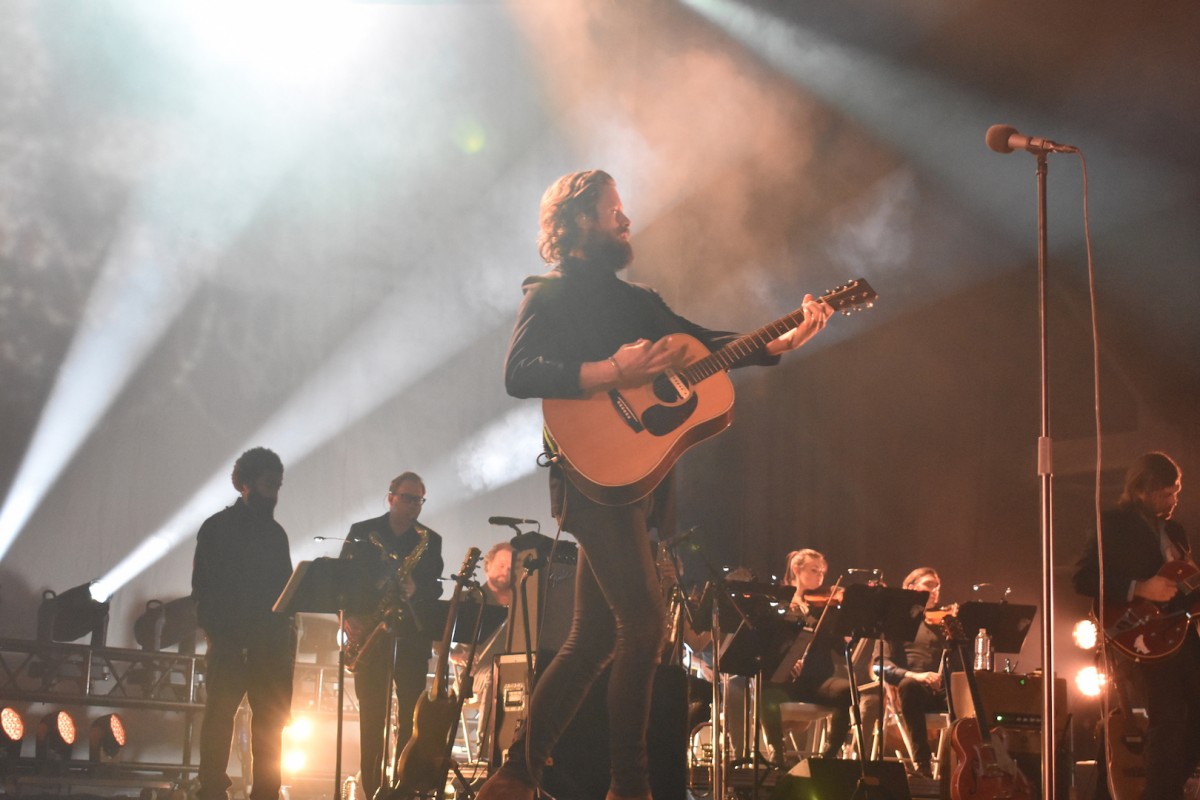 Father John Misty has released 10 studio albums since his debut in 2003, the first seven of which were published under his real name, Josh Tillman. (Christopher Romano/UML Connector)

The last time Father John Misty visited Boston in 2016, he performed a sold-out, energetic show at the House of Blues on Lansdowne street. On Sept. 13, a larger, outdoor venue featured the artist along with stunning projected visuals and a set list geared towards his two latest releases.

At the Blue Hills Bank Pavilion, images of crudely drawn characters from the cover of Father John Misty’s 2017 album, “Pure Comedy,” began to wander and stutter onto the projected image on stage while a mini orchestra created a crescendo. In a short time following that, Josh Tillman, better known as Father John Misty, appeared on stage to the audience’s applause.

Starting the show off with his newest album’s title track, Tillman crooned through “Pure Comedy” with delicacy. But when the instrumental section kicked in, Tillman showed Boston the expressive dancing that he is known for at his concerts.

After Tillman blew through four songs from his newest release, his song “When You’re Smiling and Astride Me” gained cheers from the audience. One of the more popular songs from “I Love You, Honeybear,” released in 2015, proves Tillman uses “oohs” and “ohs” better than anyone in music today. The chorus, consisting solely of longing “ohs,” was echoed by everyone in attendance.

Fans of Father John Misty know that he has a habit of being witty and charming on stage. After “Strange Encounter,” he said, “I don’t have anything particularly funny or cool to say at this moment,” as though he knew the audience was expecting him to make a joke about the current state of the world. He did however tell the audience that he loves Boston.

One of the highlights of the night was during “Nothing Good Ever Happens At The Goddamn Thirsty Crow.” Tillman was parading and dancing all over the stage, singing powerfully. His gestures and mannerisms were sarcastic and comical.

Always feeling slightly out of place, but nevertheless an amazing sight, “True Affection” brought the best of Tillman’s dancing for the night. With an epileptic light show and Tillman’s flail-like dancing, this was the most energetic and action-packed moment of the night.

As if the Summer of Love never ended, “Real Love Baby” featured a psychedelic light show while Tillman sang about love in a hippie-mantra fashion. This seemed to be a crowd favorite, as it is one of his most popular songs. The song, originally released only on Soundcloud, was included as a 7-inch single in the deluxe packages of “Pure Comedy.”

After an intense encore consisting of “So I’m Growing Old on Magic Mountain” and “Holy Shit,” the band left and a fanfare version of “Pure Comedy” played while the crew cleaned the stage. The concert was “Pure Comedy” and “I Love You, Honeybear” heavy, as only two songs from his debut album “Fear Fun” were played.

Tillman surprised the crowd by coming back on stage after a minute to shake fans’ hands and say hello. If the 20-song concert was not enough for the fans, then this extra touch made their great night that much better.