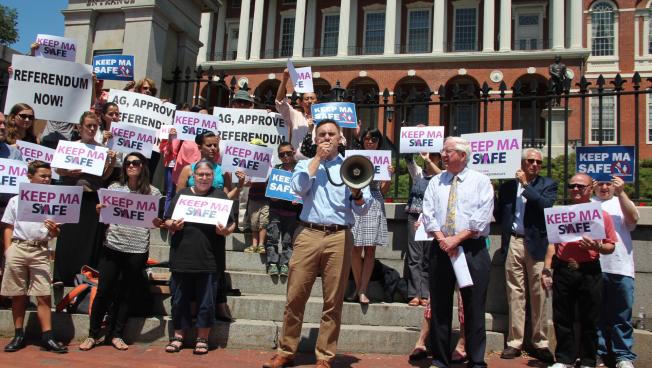 Keep MA Safe, a ballot campaign organization, obtained the needed signatures to place the repeal of the transgender bathroom bill on the 2018 ballot. (Mark Deehan/WGBH News)

Massachusetts residents will vote this November on whether to repeal a 2016 law prohibiting discrimination in public places based on gender identity. As news of congressional gridlock, executive scandals, and foreign espionage dominates the minds of many Americans, opinions on relatively small-scale events like this can be pushed to the wayside. The question stands: are people within the queer community troubled by the upcoming vote?

“I am both worried and not worried,” said Steph Giammichele, president of the UMass Lowell Pride Alliance, and a self-identifying trans person. Worried, Giammichele explained, because it perpetuates “the mentality that trans women are considered ‘men in dresses’ and that they’re predatory,” a reference to the fear felt by some opponents of trans rights that transsexual people, particularly women, may molest others if they are granted access to public bathrooms.

“I am offended that people think that it’s an issue because there is no need to be this paranoid for an issue that doesn’t happen,” stated Giammichele

Current Massachusetts law holds that private places of public accommodation, such as bars, restaurants, hotels and stores are prohibited from discriminating against a person based on their gender identity. The law came into place as the result of a 2016 vote, but Keep MA Safe, an opposition group, obtained the needed signatures that same year to place a repeal on the ballot in 2018.

“I’m sad that this is a question in 2018,” said Amy Liss, associate director of student activities and leadership and program advisor for the Pride Alliance. Liss agreed that the vote has its roots in an “inaccurate and completely wrong fear” of trans people using public spaces. The use of public spaces, especially bathrooms, is about “doing business and moving on to live your life,” she said. “Why would it have to be any more complicated than that?”

Many of those asked about the bill expressed concern that not enough people were aware of the upcoming vote. Winter Teller, a marketing major, said it was troubling that “I didn’t even know about it, and I consider myself to not be totally within the gender binary.”

Giammichele expressed a similar sentiment. “If it affects me personally and I didn’t even know about it,” then overall awareness is too low, Giammichele said. But Giammichele was doubtful that the veto would pass. “It seems like there’s a lot more people willing to help promote acceptance.”

Ballotpedia reports that those in favor of repealing the law have raised $104,650 in campaign funds as of Feb. 17. Organizations in favor of keeping the law in place, such as Freedom for All Massachusetts and the American Civil Liberties Union, have raised $458,616.

Teller was more uncertain in his response, unsure that the veto would pass or fail, but he was sure that, if the repeal was passed, it would “set a precedent of normalizing discrimination against queer people in general.”

Some may be surprised that such a debate persists in the Commonwealth. Massachusetts has long been numbered among the leaders in queer rights since same-sex marriage was legalized in 2004, a first for the entire nation. But this step, while a landmark for the gay community, may not have been entirely representative of the state of LGBTQ politics in the Commonwealth. Liss agreed that “[m]arriage equality made things seem better than they are.”

She also expressed frustration with what she described as the swinging pendulum of rights that she felt many in the queer community face. For trans people, she empathized, it must be “scary to think, ‘Alright, well, I’m legally protected today, but tomorrow I’m not.’” Liss claimed the desire to repeal the law amounted to being told “you do not have a right to exist in your human state in a public place.”

“How would you feel?”