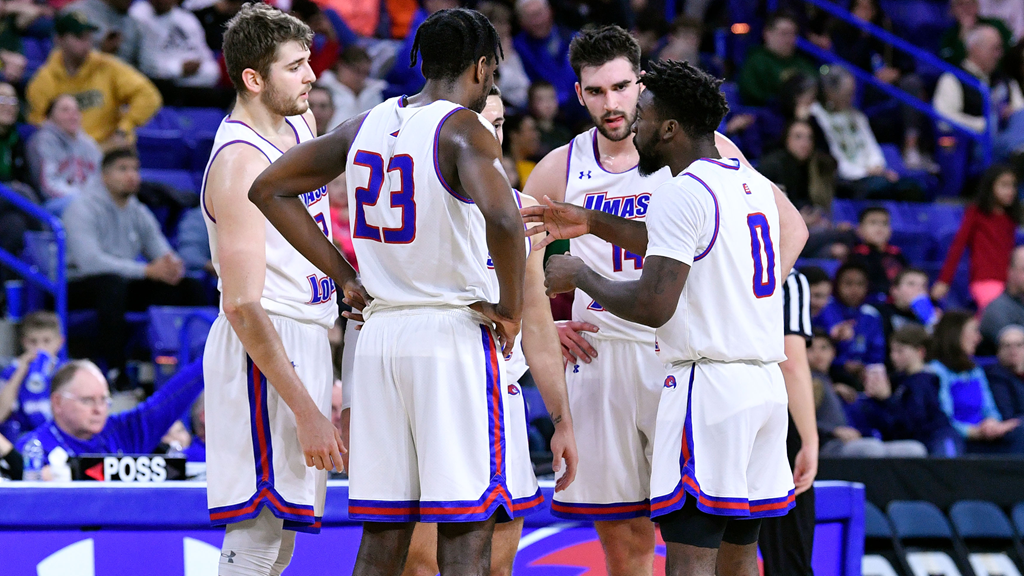 On Thursday evening, with senior night two days away, the Binghamton Bearcats (8-19) came into Costello gym and dominated the River Hawks (14-14) from start to finish.  Redshirt junior forward Christian Lutete led all scorers with 22 points and six rebounds in a losing effort.

“First of all, I’ll credit Binghamton,” said head coach Pat Duquette. “I thought they played really well…particular for a team with their record. They played like one of the better teams in the league.”

The River Hawks were celebrating their annual #SpreadRespect night. The movement reiterates the America East conference’s constant stance on working with all of its members to ensure quality and respect for all without regard to race, ethnicity, religion, sexual orientation or gender identity.

Coming off a disappointing three-game road trip, the River Hawks looked thrilled to be playing in front of the Lowell faithful once again. After winning the initial tip-off, they looked poised to take control of the game. The hosts attacked the Bearcats early in the paint, but began to settle for jumpers with less than ten minutes played against the visitor’s zone defense.

“Right from the start, I thought they [Binghamton] were confident offensively,” said Duquette. “They were really active in their zone…communicating…I was impressed with how hard they played.”

As the hosts settled for jumpers, the Bearcats would grab an early lead with beautiful ball movement. Freshman guard Alex Rivera would not hit the River Hawks’ first three of the game until there were less than six minutes in the first half. Fellow freshman guard Bryce Daley and Lutete would attempt to reestablish the River Hawks presence in the paint with hard drives to the basket to end the half.

On the other end, neither Rivera or Daley could do much to stop Bearcats’ guard Sam Sessons. Sessons torched the River Hawks in the first half; scoring 17 of his 21 points on seven shots, and helped the Bearcats go into half time with a 12-point lead at Costello.

What ensued would turn out to be a very frustrating 2nd half for Duquette and co. They would struggle to contain the Bearcats’ offensive arsenal; while senior co-captain forward Josh Gantz would foul out having over six minutes still left on the game clock.  Even with Duqeutte having the team clearly focus on high percentage shots, they just could not keep up with the Bearcats.

Sloppy play by the River Hawks enabled the visitors to score 19 points off turnovers, compared to Lowell’s six. Even with both teams scoring 36 points in the paint, the Bearcats were the clear aggressors. The Lowell faithful cheering from the stands would make no difference, as the River Hawks would fall again to a below .500 team.

“I’d like to think that we are better than that,“ said Duquette. “I know we are; we’ve shown that against some of the best teams in the league.”

The River Hawks will return to action this Saturday, as they host the Hartford Hawks for the final home game of the regular season. Tip-off for senior night is scheduled for 5:30 p.m. at Costello Gym.