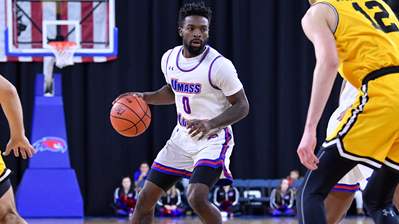 What began as a night filled with celebration for the River Hawks ended in disappoint, as the men’s basketball team (14-15) fell to the visiting Hartford Hawks (15-13), 75-73. Senior-guard Shawn Jones led the River Hawks with 16 points and eight rebounds.

On a night dedicated to honoring the graduating seniors – Co-captain Ryan Jones, forward Connor Bennett, and Shawn Jones- the River Hawks surprised people with their initial lack of intensity. Filled with hesitation, the River Hawks struggled to match the visitors offensively, falling to an early 12-4 deficit. Those first few minutes lost became the difference in this one.

With Hartford stretching the floor well, they’d grab an early 14-point lead and never let go. Freshman-guard Alex Rivera sparked a late first half run for the hosts as he hit multiple shots beyond the arc and a couple free throws to pull the River Hawks within five.

After Lowell’s defense had forced a turnover, sophomore-guard Obadiah Noel would follow suit hitting his own three. A late offensive rebound and layup by Hartford negated the hosts 9-0 run, and had the River Hawks trailing 43-39 heading into halftime.

With both teams shooting over 45 percent from deep in the first half, defenses were beginning to lock down shooters. The River Hawks played much improved defense, as they forced the Hawks to miss from deep until the mid-way point of the half.

The visitors turned to a zone defense in an attempt to control the River Hawks, but the hosts were finally able to tie the game-51 a piece-with less than nine minutes to go on the game clock. Unfortunately for the River Hawks, Hartford would go on their own 9-0 run after trading three-point bombs.

A second-half injury to Rivera and Gantz fouling out became too much for the River Hawks to overcome.

Noel, season-leading scorer Christian Lutete, and freshman-forward Allin Blunt hit late shots to give the River Hawks a chance down the stretch; nevertheless, two late free throws by Hartford sealed it for the visitors in the final home game of the year for UMass Lowell.

The River Hawks will end the regular season with two games on the road, as they visit Maine and Vermont respectively. America East tournament play will begin on March 9th.