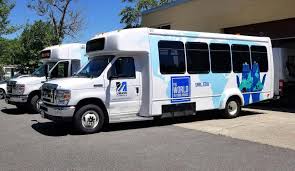 After a long night at the library, most students do not give the shuttle ride back to their dorm much thought. They are apt to board the bus, greet the driver and then zone out letting the radio chatter and traffic fade away.

While we do not always notice them, shuttle drivers may have one of the cooler jobs on campus, and not because they have a front row seats to the weekend bar crawls, or simply because they leave the job with a certification to drive larger commercial vehicles. One reason is that after 5:00 p.m. on weekdays and for the entire weekend, as student driver and supervisor Kaleigh Patton explained, Transportation Services is entirely student-ran.

Patton, a junior Biology major, explained last Tuesday night while waiting for students to board the yellow line from the I.C.C. to North campus, that the office provided her with the growth and development she could not get any other job.

Patton drove past the Dunkin’ Donuts on University Ave. as students from late classes and labs spilled out on to the sidewalk. The radio crackled, and another driver said, “I see we have our party lights on today.”

“That’s an inside joke,” said Patton. It refers to when one of the drivers leaves the stop with their flashing lights on. The shuttle drivers have a lot of inside jokes. In fact, despite the divided work environment, the group seems quite close.

Patton explains that drivers see each other a lot more than students would think. On Thursdays, Fridays and Saturdays buses on busy lines have co-drivers: one driving and the other performing “crowd control.” Then there are team building events like bowling, creating playlist together or late-night trips to Club Diner on Fridays and Saturdays after closing.

Another significant contributor to the camaraderie is that the job requires them to communicate with one another efficiently and naturally.

“I’ll check in with [the other driver] and say hey I’m going to leave in 20 minutes and if there is a hiccup you can just communicate with them.” Said Patton, “So it’s very collaborative in that sense.”

Corinne Bailey Rae’s “I’d Like to” plays as Patton greets students boarding from the Inn and Conference Center. Patton explains after greeting them that drivers can play their own music, provided they keep it appropriate, and many tend to put together a couple of different playlists for when they drive. She calls the playlist featuring Rae her “Tuesday afternoon relaxation music” and jokes about playing dad rock late at night when she needs a change of pace.

Nicholas Morse, a sophomore Criminal Justice major, who has driven for two semesters, likes to play country, as one student rider pointed out, but Morse, like many of the drivers, has a playlist of genres he cycles through.

Most interactions with students are short questions Morse said: Can he stop someplace, when is this next bus and which way is he going. Since he is working, he has never tried to initiate conversations with the students, but anytime a student tries to talk to him he knows the conversation will be interesting, often philosophical in some nature.

“I like how it’s relatively relaxed and not stressful,” said Morse explaining what he likes most about the job, saying it was a nice change of pace from his old job at Dunkin Donuts. He joked that the pay and fantastic co-workers do not hurt either.

“There is no room for people who won’t do the job properly because there is a safety issue behind it,” said Morse, explaining the most important part of his job. Morse said he knows many students are interested in driving the shuttles but are intimidated by the size of the vehicles. Morse encouraged students to “take a leap” and apply later this spring despite that fear because the shuttles are easy to learn.