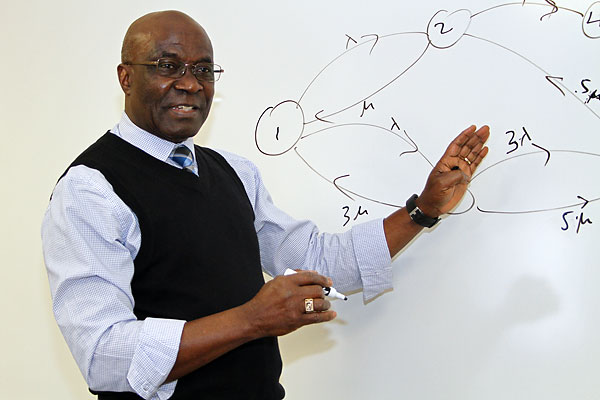 Allegations against engineering professor Oliver Ibe were first made public in an article published in The Sun on Saturday, Apr. 20. (Courtesy of UMass Lowell)

The UMass Lowell campus community was rocked by an article published in The Sun on Saturday, Apr. 20, that broke news of sexual harassment allegations levied at former Associate Dean of the College of Engineering, Oliver Ibe. This article detailed both the alleged incidents in question and the investigation by the university into the matter.

While UMass Lowell found that Ibe did violate the university’s policies against sexual harassment, discrimination and misconduct, Ibe was not fired. He was stripped of his associate dean title by Dean of the Francis College of Engineering Joseph Hartman and took a nearly $50,000 pay cut.

Ibe was advised by Hartman in a letter that if he engaged in further behavior that violates university policy, he “will be met with discipline, up to and including the university’s right to invoke termination and/or dismissal proceedings,” as reported by The Sun.

Hartman did not respond to two requests for comment from The Connector.

The university acknowledged the case in a statement provided to The Connector, pointing to both the original 2017 case and the one filed with the Massachusetts Commission Against Discrimination in 2018 which resulted in a settlement between the claimant and the university.

UMass Lowell stands by the decisions made in both cases, as said in the statement. The case itself is closed and “cannot be re-adjudicated based on the same set of facts,” according to the statement.

It will, however, form a task force after commencement that will look into the university’s current sexual harassment and discrimination policies. Joanne Yestramski, senior vice chancellor of finance, operations and strategic planning, is convening the task force. Students, faculty and staff may email her to either volunteer or nominate others; according to the statement, this interest is due by May 1.

No members have been chosen as of yet, according to UMass Lowell’s executive director of communications Jonathan Strunk.

“The university will continue to assure members of our community that UMass Lowell is committed to an inclusive working and learning environment free of discrimination and harassment, and that any allegation of misconduct or abuse is taken seriously,” the statement read.

The statement continued by saying that UMass Lowell is open to reviewing its sexual harassment and sexual violence policies, and will engage in a “constructive campus dialogue,” and any changes will lead to “an enhanced working environment.”

Chancellor Jacquie Moloney was not available for comment, according to university spokeswoman Christine Gillette, who offered The Connector several statements on behalf of the university.

Patricia McCafferty, the vice chancellor of University Relations, declined to comment on and instead referred The Connector to the university’s statement.

UMass Lowell’s handling of the case did not sit well with some students, faculty and alumni. Freshman biomedical engineering student Maria Kotob started a Change.org petition calling for Ibe’s immediate dismissal from the university. An account on Instagram, @umlsilentprotest, is calling for a sit-in outside of Moloney’s office on Wednesday, May 1, at 6 p.m.

Mignon Duffy, chair of the sociology department and a leader on a separate and “unofficial” faculty and staff task force reviewing the alleged incidents, expressed disapproval with the university’s decision.

She said that she originally heard about the incidents from the claimant, and was disturbed about the twice-repeated violation of university harassment policy. Duffy said that in her opinion, the university did not handle the matter properly.

“A true educational effort would go far beyond that to help people understand the dynamics of power in harassment, have a meaningful conversation about accountability and process, think about how to best respond to targets when they report in ways that are not retraumatizing, et cetera,” said Duffy. “That is – education is really focused on culture change rather than legal protection.”

Duffy told The Connector that she has volunteered to be on the university’s official task force.

Other faculty members also addressed their concerns with the allegations levied against Ibe.

“When you’re the recipient of harassment in the workplace, you need to decide whether you will grin and bear it or forego working with the harasser,” said Dr. Brenna Quinn, an assistant professor in the School of Nursing.

Quinn, who is an alum and a current student of the university, first learned of the incident when two coworkers sent her the faculty petition to suspend and remove Ibe from campus.

“Hearing about it made me both sad and angry for the victims, and the loss we all suffer when employees can’t perform to their full potential due to such harassment,” said Quinn.

Edit: A previous version of this article stated that vice provost Michael Vayda was resigning in a move the paper learned about on Tuesday. After contact with the university, The Connector has learned that Vayda stepped down months ago, a fact which we were not aware of. We deeply apologize for the error, and offer those curious a link to the announcement.

In another note, we have learned that the “open forum” regarding the vice provost positions are in actuality a small luncheon that will be attended by a select number of students for them to get to know the potential candidates.