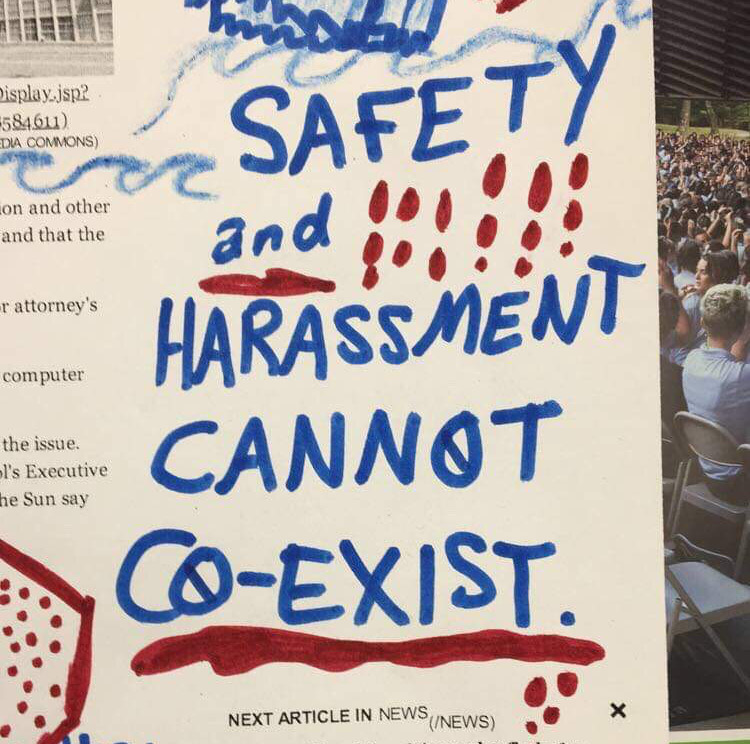 A printout of the Lowell Sun’s article about UMass Lowell’s handling of allegations against Professor Ibe was present in Mahoney Hall with students’ reactions written on it. (Photo courtesy UMass Lowell Connector)

“I had read in the Lowell Sun that a group of faculty had started a similar petition to get [Ibe] fired, and since it didn’t catch much traction, I thought it was time to get the students involved,” said Maria Kotob, a freshman biomedical engineering major.

On Saturday, April 20, the Lowell Sun published an article detailing sexual misconduct allegations against former Associate Dean Oliver Ibe and how UMass Lowell demoted, but did not fire, the electrical and computer engineering professor after the allegations were brought to their attention.

Hours after the story broke, Kotob started a Change.org petition, calling for Ibe’s suspension pending an investigation and for the university to crack down on sexual violence. As of Wednesday, May 1, the petition has amassed over 1,300 signatures. Kotob mentioned that Andrew Finerty, a sophomore criminal justice major who started the petition earlier this school year to change the dining hall, helped her to create the Change.org petition.

“This sets a precedent that sexual harassment or assault only results in the equivalent of a write up. Absolutely disgusting,” Finerty said.

When asked if he believes if the university will commit to change the way it did after he created his petition, Finerty said, “I don’t think they will. They clearly do not care about the safety or well-being of their female faculty or student body, and only care about their own image.”

Justin St. Louis, the President of UMass Lowell’s College Republicans club said, “I think that it’s a little bit disturbing that it seems like this occurred two years ago and we’re only hearing about it now.” St. Louis also said, “I’m not sure if [those in charge] realize the reaction of the university. I’m sure that they are certainly listening, and whether or not it influences the conversation remains to be seen.”

St. Louis expressed that Ibe should have been placed on leave during the course of the investigation. Julie Lawton, the President of College Democrats, could not be reached after multiple requests for comment.

Disappointment with how the university handled the situation was reiterated by other students as well. Winter Drake, a junior business major, said, “I think the school’s decision to not fire [Ibe] over being caught for sexual harassment is totally deplorable, but not unexpected. This school doesn’t care about students, women, or anything other than making tuition dollars.”

This disappointment was echoed by E-board members of the Student Government Association in their statements and during interviews.

“I wholeheartedly condemn Professor Ibe and call on him to tender his resignation immediately. We cannot tolerate acts of sexual harassment on this campus by students and faculty alike,” wrote Ryan Callahan, the student trustee-elect in a statement to the Connector.

Despite his feelings on the case, Callahan elaborated in his statement that UMass Lowell has done everything they can legally do and has followed the guidelines in place down to the wire. The guidelines did not call for the termination of the professor. Callahan points to this as a flaw in tenured system.

Both Callahan and DiFilippo are correct. Under the Fifth Amendment Double Jeopardy Clause, UMass Lowell cannot legally reopen this case or fire Professor Ibe for these charges unless new evidence is brought to light.

“I do think that the whole situation–and this is where the value from students and professors speaking up comes from–is bringing to light that these policies should reflect a zero-tolerance policy to prevent situations like this from happening again,” said DiFilippo.

DiFilippo hopes that the task force Chancellor Moloney has announced will facilitate these changes in guidelines that will push the school towards a zero-tolerance policy that, should something like this ever happen again, somebody like Professor Ibe would be fired despite their standing at the school.

DiFilippo was concerned that students would not be a part of this process, but is glad that Chancellor Moloney’s plans include student representatives on the task force.

As the task force begins to take form and make the changes to these policies, Hannah Casey, the SGA Vice President-elect, promised in a statement to the Connector that she and the SGA President-elect will continue to work alongside Callahan to improve on campus safety and help provide resources for students affected by these issues.

Emily Parsons, a sophomore English major, has had her own dealings with the university in regards to the handling of allegations of sexual misconduct. She referenced a follow-up Lowell Sun article on Ibe that included a statement from the university, which said the school will “continue to assure members of our community that UMass Lowell is committed to an inclusive working and learning environment free of discrimination and harassment, and that any allegation of misconduct or abuse is taken seriously.”

In response to that, Parsons said, “That’s the kind of [expletive] I got, too, regarding my case. ‘We make sure that all students are safe.’ No, you don’t.”

According to Parsons, she was raped by a UMass Lowell student and came forward several months later with her story. At the time of reporting her rape, Parsons was living in Concordia while her assailant lived in Sheehy, right under the same roof. Parsons says she went to the residence director of the building, and the director helped her get in contact with the UMass Lowell conduct office.

The university opened an investigation into Parsons’ claim, and the student in question was moved to Fox Hall during that time period, but the end result was that no action would be taken and that the student was moved back into Sheehy.

Parsons filed an appeal, citing procedural errors, and said, “They show you the other person’s testimony, and I noticed that there were a lot of things, too, on my testimony, that they left out.”

She also said that, from viewing the other student’s testimony, he was asked no follow-up questions about statements he made, which the conduct office, in a letter turning down Parsons’ appeal request, argued was not a procedural error.

According to the letter Parsons received from the conduct office, another reason her appeal was turned down was because, “The definition [of consent] given states that affirmative decisions to engage in sexual activity must be given by clear actions or words. It was clear when reading the investigation notes [redacted] perceived Emily’s actions to be affirmative when making a decision to engage in sexual intercourse.” Parsons states that neither she nor her assailant said she verbally consented to sexual intercourse in either of their statements to the conduct office.

The UMass Lowell website has a Sexual Violence Prevention and Education page, which includes definitions on terms related to sexual violence, including consent. The webpage states in its definition of consent that “Relying solely upon nonverbal communication can lead to miscommunication. It is important not to make assumptions; if confusion or ambiguity on the issue of consent arises anytime during the sexual interaction, it is essential that each participant stops and clarifies, verbally, willingness to continue.” The page also says, “consent to one form of sexual activity does not imply consent to other forms of sexual activity.”

The Connector reached out to The Office of Student Conduct and to Associate Dean of Compliance and Violence Prevention Annie Ciaraldi in regards to Parsons’ letter and the information listed on the UMass Lowell website’s sexual violence page. Both student conduct and Dean Ciaradli explained that federal law prohibits staff from commenting on any cases as they are confidential.

Edit: A previous version of this article stated that Parsons’ rape occurred while she lived in Concordia and her assailant lived in Sheehy. The article has been changed to reflect that Parsons made the report at that time and the event happened prior to her living in Concordia. The Connector apologizes for the error.