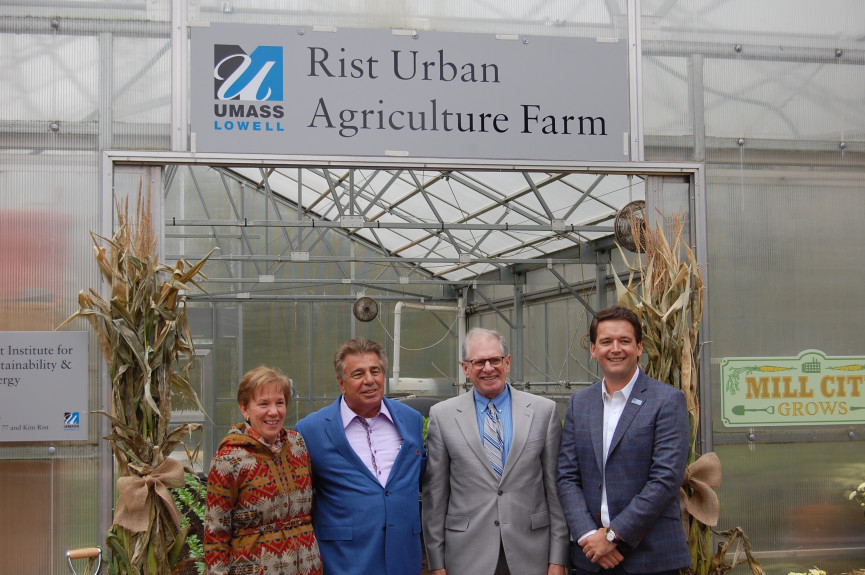 The Office of Sustainability, the Climate Change Initiative and research on clean energy and sustainability will soon come together under a new umbrella institution at UMass Lowell, called the Rist Institute for Sustainability and Energy. The university announced the program during homecoming weekend at the renaming of the greenhouse on East Campus, now called the Rist Urban Agriculture Farm.

This program was made possible by alumni Brian Rist, who donated $5 million to the university last year. One-fifth of that donation was dedicated to sustainability efforts and will be used to fund the institution and its research.

The Insitute will have three co-chairs, including Director of Sustainability Ruairi O’Mahony, the director of UMass Lowell’s Climate Change Initiative Juliette Rooney-Varga and the director of the Center of Wind Energy Christopher Niezrecki. O’Mahony said that $500,000 of the donation will go to an endowment to ensure the longevity of the program, and the other $500,000 half will go to things like student fellowships and research.

“The students are the driver of everything we do,” said O’Mahony. “A lot of the progress we have made, a lot of the nice projects we have done have come from the students. Through the Student Government Association (SGA) and the Campus Life Environmental Committee, we have been able to get a lot of their top priorities done.” O’Mahony says an important goal of the institute will be increasing student opportunities for student engagement.

O’Mahony says the program is still in its infancy, so he cannot yet say if there will need a physical location, but he did say that the institute will facilitate these groups coming together on larger projects.

“The whole intent is that this new Rist institute serves as a type of umbrella organization. We will all retain our autonomy,” said O’Mahony. “But it gives us a way to organize around the entire concept of UMass Lowell as a center of excellence for sustainability.”

One program that O’Mahony says they hope to launch soon is the green office program, which will allow the office of sustainability to work with offices around campus to find energy and cost-saving measures in each office.

O’Mahony pointed to a blue sticker fitted to his light switch, saying, “This is a very simple example here. In areas where we have light switches that typically blend into the wall calling them out and putting awareness around the benefit of energy conservation.” Simple measures like this, he said, have the potential to decrease the energy budget by 20 percent through user behavior. These savings could be reinvested into the campus.

Another project still very much in the planning stages is a shared path running the length of Pawtucket Street from the Tsongas Center to South Campus, O’Mahony said.  The path would dove-tail current projects like the construction on the two bridges and the eventual construction on both a park and pathway that complies with regulations from the American Disabilities Act (ADA) where two houses currently sit across from UCrossing.

O’Mahony said one place of particular interest would be the intersection on School Street near the Franco-American school.

“In the afternoons, naturally two lanes form, just out of frustration, because that is a heavily congested intersection. We are looking at standardizing the roadways and then creating enough width to put in a separate path which would connect the campuses, but also make individual users feel a lot safer,” said O’Mahony.

The priority is the student experience said O’Mahony, and that they are trying to target the 80–85 percent of students who might be willing to try walking or biking but have no experience doing so in high traffic areas. He says when the bridge project is complete, and the buses can drive straight from East to South Campuses, it will change the perception of how far way the two campuses are.

The project is still in planning, says O’Mahony.

“There are a lot of pieces in play. We have been super fortunate that the city administration is so willing to work with the university,” he said. O’Mahony credited Chancellor Jacquie Moloney for facilitating that relationship between the university and the city.

“There is still a lot of work to do, but I think the strength in our sustainability program is that we realize we have made a lot of progress,” said O’Mahony, “but we also realize that we have a lot of progress still to make.”