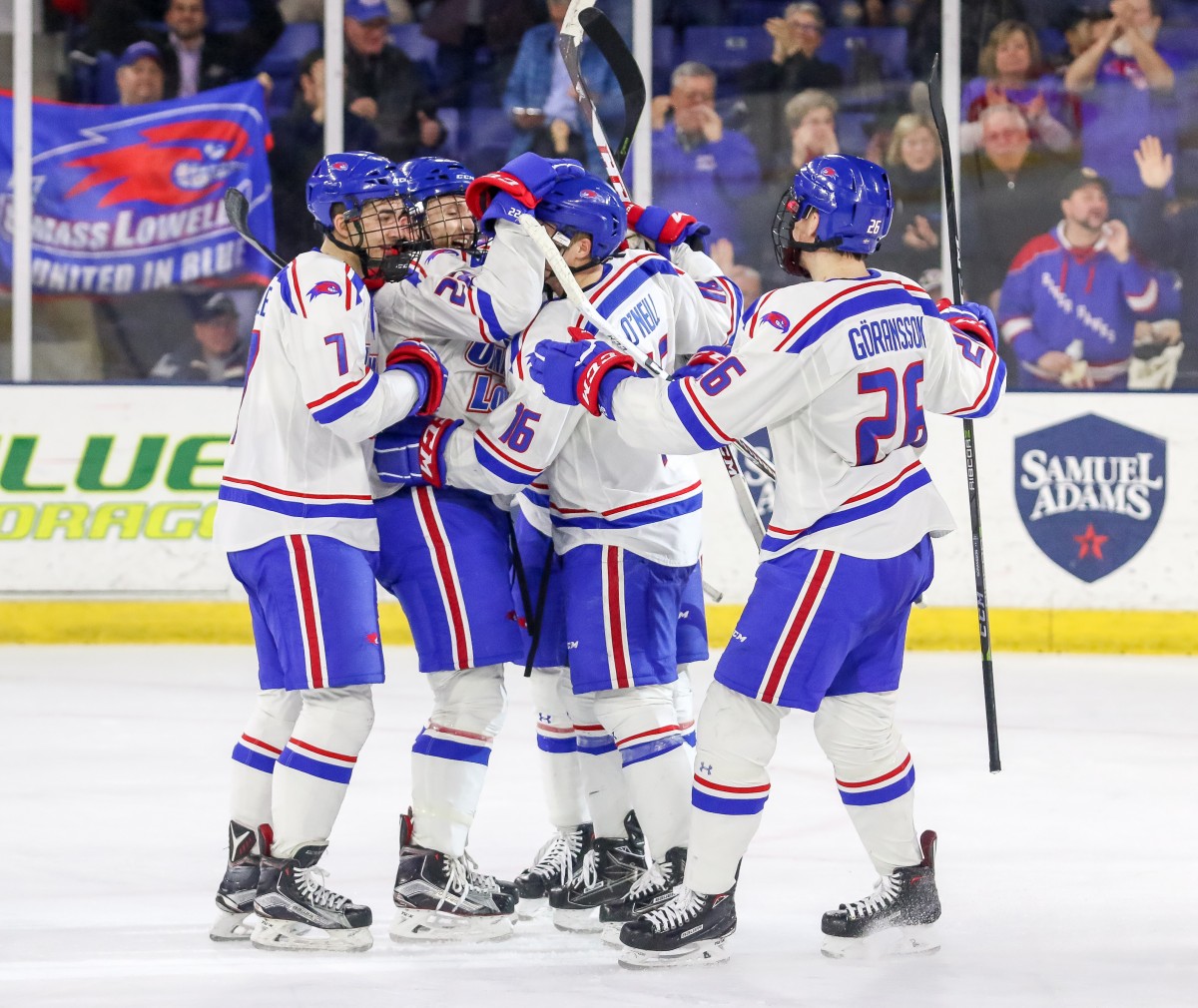 Junior forward Brian Rigali scored halfway through the third period and that would prove to be the difference, as the UConn Huskies defeated the No. 12 UMass Lowell River Huskies 2–1 Saturday night at the Tsongas Center.

Rigali’s goal came off a rebound and he was able to sneak a quick wrist shot by River Hawks goalie Tyler Wall.

The River Hawks (7-3-4, 4-1-3 HEA) could not seem to get the puck in deep of the Huskies zone and although they outshot the Huskies 30–28, the River Hawks did not get many prime scoring chances until just about a minute left in regulation.

The loss is the first for the River Hawks since Oct. 18 against Colgate University, snapping an eight game unbeaten streak.

The Huskies (3-4-2, 2-3-1 HEA) led by a solid performance by sophomore goaltender Tomas Vomacka, earned their third road win of the season, and their first victory since Nov. 1 at Merrimack College.

“We played fast, hard and tough,” Vomacka said. “I felt good [about my performance], the guys in front made it easier for me, especially our [penalty kill unit].”

The scoring started with a wide rebound opportunity for Huskies senior forward Wyatt Newpower, who slapped a shot from the right point after a wrist shot from the slot by freshman forward Vladislav Firstov was kicked wide by Wall.

“Overall, it’s a tough feeling,” River Hawks head coach Norm Bazin said after the game. “We had experienced about three and a half weeks without a loss… our lack of execution and our lack of finish came back to bite us. They played a good game… they deserved to win.”

The River Hawks did perform better on their penalty kill unit and did a great job by staying out of the box, limiting the chances the Huskies had with the puck and keeping the game close until the midway point of the third period. The River Hawks killed off the only power play the Huskies had.

“Our [penalty kill] was better, I thought we generated a lot more chances, but we didn’t finish,” Bazin said. “So, stuff happens.”

After a rather uneventful first period and halfway through the second, the Huskies showed better puck control and pelted Wall with a flurry of shots in different areas between the pipes.

“We had a gameplan and we executed it,” Huskies head coach Mike Cavanaugh said. “when we went into the game, our thought process was that we did pretty well last night, and we wanted to make sure we did it again. If you want to be a good team in this league, you can’t just be good on Friday night and not good on Saturday night. To be able to get three out of four points, the hard way, against one of the top teams in the league, [I am] certainly very proud of our guys tonight.”

River Hawks defenseman and extra attacker Jon McDonald scored with 61 seconds remaining in the third period after Wall was pulled to give Lowell the man advantage, but the effort was too little, too late.

“We put 16 shots on them [in the third period],” Bazin said. “Obviously it wasn’t enough. We just have to do better going forward.”

UMass Lowell returns to action for the Turkey Leg Classic on Friday, Nov. 29 against Rensselaer. Game time from the Tsongas Center is 4 p.m. The game will be streamed nationally and internationally via CBS All-Access.