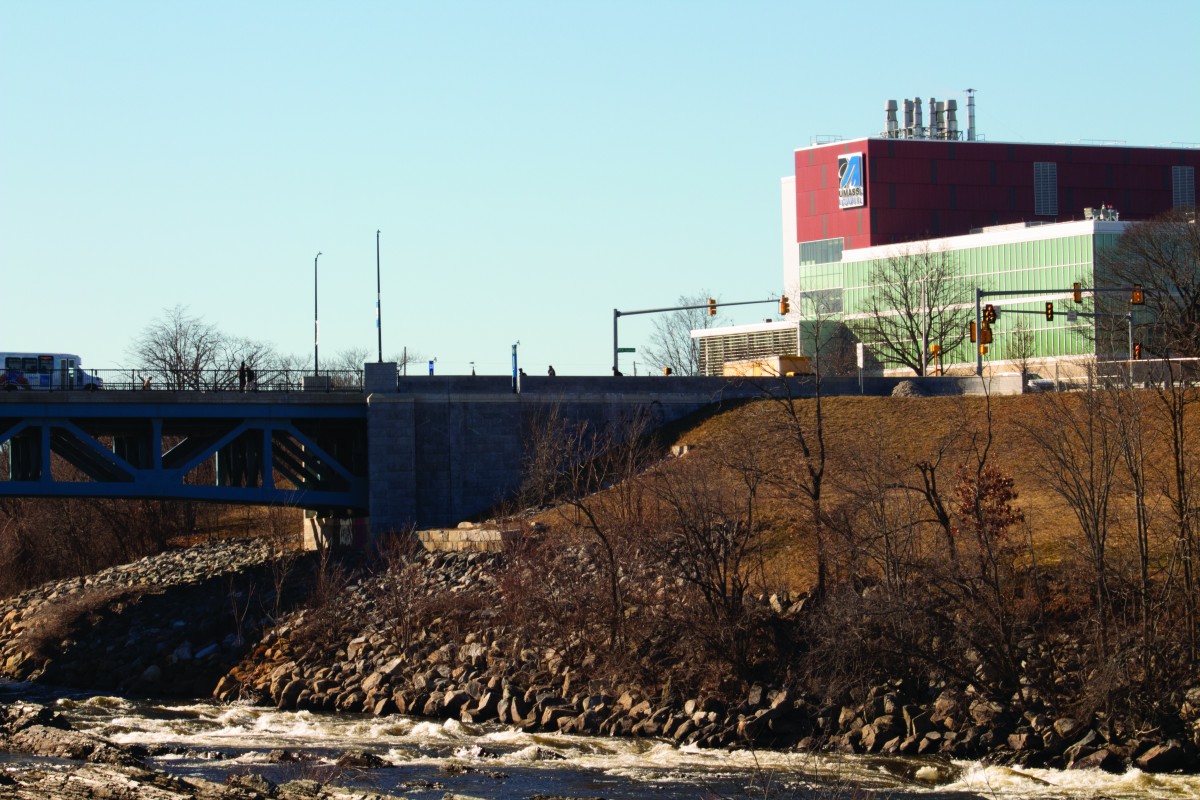 (Brigid Archibald / The Connector) the MRWC has held the conference, focusing on the potential threats to the river and the people who depend on it. This year speakers focused on topics like PFAs, Combined Sewage Overflows, and Green Architecture.

Many students say they have heard stories about how people used to be able to tell what the factories were making any given day by the color of the Merrimack River. Now students say they are most concerned about trash in the river.

“I live in the Edge apartments, and there is a runway of water next to where I park my car. You look down there, it’s not that deep, and you can see the bottom, there is a lot of trash,” said Christian Randazzo, a junior plastics engineering major. “A lot of people just throw things in there.”

According to experts who spoke at the Merrimack River Watershed Council’s (MRWC) State of the Waters Conference on Friday, Jan. 31, the Merrimack has more than a few litterbugs to worry about.

This is the fourth year that the MRWC has held the conference, focusing on the potential threats to the river and the people who depend on it. This year the theme was the next generation of pollutions, such as microplastics and Per- and Polyfluririalkyl substances (PFAS), as well as possible solutions.

“We can’t possibly measure everything, but we need to be smart about what we do measure,” said Wendy Heiger-Bernays, a clinical professor of environmental health at Boston University. Heiger-Bernays spoke about the possible toxins in water, warning against jumping from one shiny object, like PFAS, to the next.

While PFAS and microplastics were massive talking points, Heiger-Bernays and many speakers focused on a much larger problem, Combined Sewage Overflows (CSO). CSO events occur where too much rainfall puts pressure of water treatment plants along the river, forcing them to release the untreated water that could potentially contain microplastics, pharmaceuticals, harmful bacteria and much more said the speakers.

In these cases, the Environmental Protection Agency (EPA) has approved the release of this water. Still, it often recommended that people avoid entering the Merrimack in the areas of the dumps from 24 to 72 hours after the release of the water.

As of now, residents are not currently informed of CSO events unless they look for the information or ask each plant to place them on an email alert list, but legislation is currently in the works to change that.

“It is absolutely necessary for our public health. Our citizens deserve to know the statuses of the river and whether they can engage with that river in a recreational environment, or whether it is unadvisable,” said Mass. State Representative Linda Dean Campbell about the bill on CSO notification.

The bill Campbell said would require that people be informed of CSO events within two hours and that the Department of Environmental Protection collects data on the events for an annual report.

While the legislation is in the works, Senator Diana DioZgilo said she has created the Merrimack River District Commission. The commission will pilot a flagging system on Newburyport beaches this summer that will tell people on beaches whether it is advisable to enter the water or not. DiZoglio says the group also hopes to create an app and a website to alert people beforehand.

Many members of the MRWC say that the public needs better communication about the risks using the Merrimack recreationally after a CSO, and they should have a better time frame than 24 to 72 hours.

Greg Coyle, a staff engineer for the Lowell Regional Wastewater Utility, said these constant tests of the area impacted by events like COS are impractical and put a strain on the wastewater treatment plants when they should be focusing on keeping the operations of plants up to date.

“We need help, really, to implement a more robust monitoring program so that we can know whether it is safe to use the river with reasonable certainty,” said Coyle.

A new in water bacteria testing system called “Alert” could potentially alleviate some of that pressure. Coyle said that the new device, created by a French company, could test the water on-site and report back the results faster than a lab. The device is not certified in the U.S., but Lowell will be using the device as part of a case study that could get it certified.

The legislation is currently in the works to potentially decrease the need for CSOC events. Congresswomen Lori Trahan said during the conference that the Bipartisan Stop Sewage Overflow Act would create more funding for grants for communities to improve sewers infrastructure and increase Federal aid for infrastructure in cities.