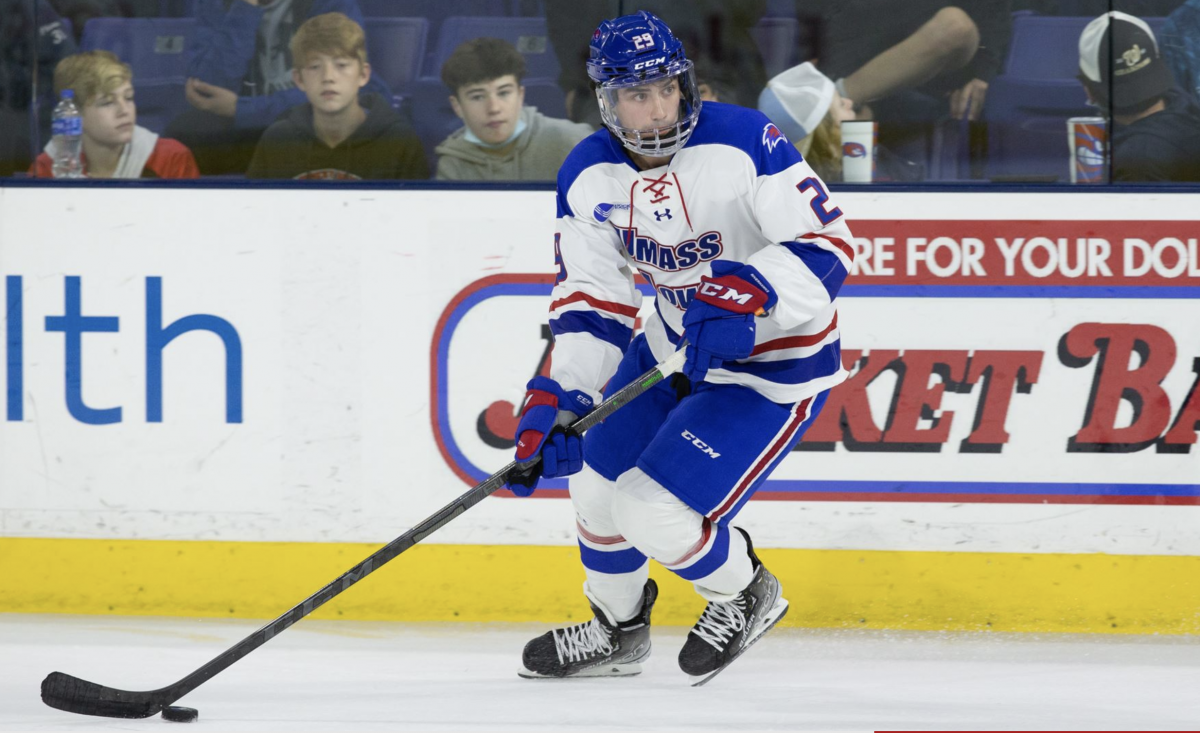 It was a tightly defended game with strong goaltending on both sides. The Huskies outshot the River Hawks 34-24 and River Hawk goalie Owen Savory continued his strong play. Last week  Savory was named Big East goalie of the week when the River Hawks defeated the nationally ranked Northeastern Huskies and Boston College Eagles on back-to-back games last weekend.

The victory stretches the River Hawks unbeaten streak to nine games after an opening night loss to Arizona State. Since that game, the River Hawks have won seven and tied two and remain an undefeated 5-0 against Hockey East foes.

The first period of the game was scoreless. The teams traded power play opportunities and quality scoring chances in the first part of the period and both River Hawks goalie Savory and UConn’s Darion Hansen took turns denying scoring chances.

UConn had a strong final few minutes in the period. A goal from UConn’s Jonny Evans was awarded 16:26 into the period, but was waived due to a deflection from a high stick.

The lengthy referee review of the play and reversal of the on-ice decision kept the period scoreless, and the River Hawks were able to hold off the continued late period pressure by the Huskies.  The period ended with a penalty at 19:52 for a hit-from-behind by Huskie Marc Gatcomb and a power play for the River Hawks.

The second period began with a quality power play by the River Hawks, but the best scoring chance came on a turnover and shorthanded breakaway bid by UConn’s Carter Turnbull that was nicely turned away by Savory.

A penalty was called on River Hawks Nick Austin for holding at 8:52 into the second period which put UConn on the power play. The River Hawks continued with a solid penalty kill with the best opportunity from a Huskie Chase Bradley wrist shot bid turned away by Savory continuing his strong afternoon.

UConn had the more impressive second period and outshot the River Hawks 13-9.

A tripping call on Lucas Condotta with forty seconds left in period put the Huskies on a power play. The River Hawks began another strong penalty kill and Ben Meehan had a good shorthanded goal bid in final seconds of period followed by a holding call on UConn Captain Carter Turnbull. The period ended with game still scoreless and the teams playing four on four.

Early in the third period Meehan deflected a slap shot opportunity in final seconds of the four-on-four play. Huskie goalie Hansen then made a nice save on a Marek Korencik slap shot four minutes into the third period.

River Hawk junior Andre Lee then broke the scoreless tie 4:34 into the third period. The Huskies committed a costly turnover in their own zone leading Lee to get a shot off an assist from teammate Carl Berglund for his sixth goal of the year putting the River Hawks up 1-0.

The River Hawks gained energy and momentum from that goal and continued with good puck possession and scoring opportunities through the 13-minute mark of the period.

The Huskies had continued pressure to try to score the equalizing goal through the middle of period marked by a Chase Bradley shot from the right wing and save by Savory with just over 10 minutes left in game. Hansen then returned the favor with a nice save on a turnaround wrist shot from Lee.

The save of the game occurred at 8:46 of the period as Savory slid across the crease to stifle a rebound attempt by Huskie Ryan Tverberg. Attempting to slow down the Huskie pressure, River Hawk coach Norm Bazin took his timeout to talk to his troops and settle the game down.

Continued Huskie pressure led to a River Hawk turnover in their own zone and Savory gloved another attempt from the blue line by Huskie John Spetz to mark his 13th save of the game.

The River Hawks mounted pressure in Huskie zone with six minutes left in game and with 3:43 left in game Andre Lee scored his second goal of the game with an across-the-body wrist shot from the left face-off circle.

Trailing 2-0 UConn pulled Hansen from goal for a sixth attacker with 2:00 left in the game. An empty netter with 1:35 left in the game by River Hawk Reid Stefanson sealed the River Hawks fifth straight victory in Hockey East and stretched their unbeaten streak to nine games.