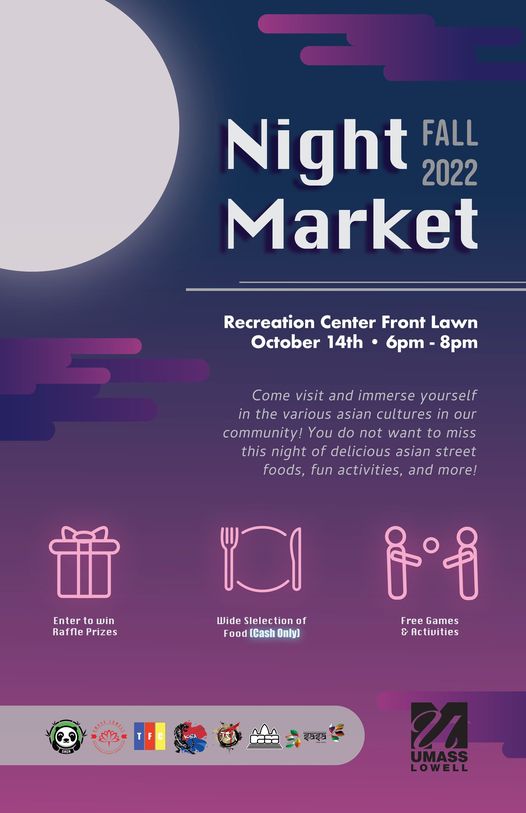 (Photo courtesy of Umass Lowell Student Association of Chinese Americans Facebook) “Night Market is an annual event that is collaborated between the Asian sister clubs.”

Friday, October 21, from 6 to 8 pm, the Asian clubs hosted their annual Night Market, an event run in the fall that displays the cultures of the Asian clubs through food that students and the community can buy. At 8pm on that Friday, students and others who had attended were hanging out with the event still in full swing, and the event didn’t die down fully until closer to 9pm. Michelle Voong, a junior graphic design major who is president of the Students Association of Chinese Americans, says she hopes to host the event again, this time in the Spring.

Event goers said that a highlight, aside from the attractions, was getting to spend time with friends, meeting new ones and enjoying the culture. Le said “I did really have a great time.”

The Night Market serves multiple purposes, as a way for the clubs to come together for the community, an opportunity for students and others to enjoy a market and a variety of foods and to raise funds that are then used by the clubs for future Night Markets and other events. Voong said, “We made a good profit from it as well, so that is going back to these sister clubs so they can bring it back to the community and their events and stuff.”

Night Market is not a novel event at UMass Lowell, with several alumni who attended the event able to reminisce about their university day Night Markets. “It’s an annual then that is usually run during the fall semester and usually it’s very kind of like similar theme. It’s just based on the night markets that are actually in Asia as well. So over in Asia they would have a bunch of food stands and concession stands of food… So we made twist on it to have like the food stamps be of the different sister clubs. So then you get a variety of Asian street food from various Asian cultures.”

The Chinese Club’s food staples for the Night Market was Tang Hulu, “this year we did Tang Hulu, which is a Chinese dessert … basically it’s just fruit encased in a hard sugar and then when you bite into it you get like this really nice crunch, and you get like the tartness of the fruit. We also had curry fish balls and we had some dumplings too, both pan fried and some boiled. And we also had two flavors of boba… we did the milk tea, and we did a passionfruit green tea.”

The Asian American Center for Excellence & Engagement (AACEE), not to be confused with the Association for Campus Events (ACE) also had a table at this year’s event. It’s a department at UMass Lowell dedicated to helping Asian American students at the university. Voong said “their office is located on the 2nd floor of Cumnock Hall, and they just opened their office this semester I believe. So it’s a brand new office. It’s really a very chill environment.”

The Market has traditionally been held only in the fall, but based on turn out, it doesn’t seem that students would mind a repeat of the event. “We’re thinking about doing it in the spring. Of course, like depending on what happens, you never know how things would happen, but we are really, really hoping we could do one in this spring if things work out, because last year I know there are some people who couldn’t make it to Night Market and they were asking ‘will there be a spring one?’ ‘I’m so bummed I missed the Night Market‘ or ‘when are you guys going to have another one’” Voong said people often ask about it being more than just the fall, so “If people really like it that much, maybe we can try doing this spring so I’m trying to talk to my team about that and hopefully we can make it happen.” Voong

acknowledges it may not happen, due to the spring semester being a very busy time, especially for the sister clubs who have other events planned.

Even if the Spring Night Market does not occur, the sister Asian clubs will host their annual Asian Night. Last year’s Asian Night’s theme was New Generasians, and had a high turnout, showcasing several different popular bands. It was aided by the Filmmakers Club, who filmed the event.

Voong was pleased with the turnout of the Night Market, and how smoothly it ran. “I do definitely want to give like special thanks to ACE, AACEE and from OMA and all my sister clubs and like all our volunteers who help make the Night Market and this fall night market runs smoothly. And also thanks to our visitors, all the students that came and I know there are some families that came from out of town.”