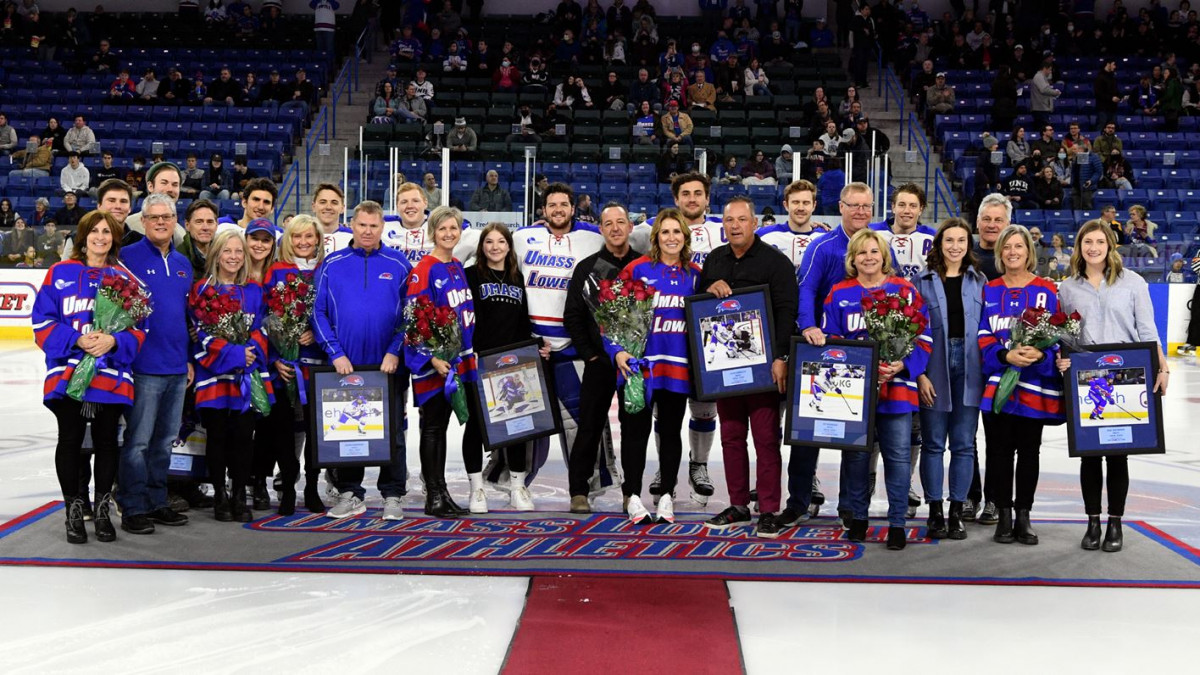 The River Hawks had a successful weekend where they beat UNH twice, first on Friday night then on Saturday night. Lowell improved their record to 20-9-3 heading into the end of their regular season and the beginning of the Hockey East tournament. Lowell is currently ranked 16th in the nation.

On Friday night, Lowell faced off against the Wildcats in New Hampshire. The game ended with Lowell on top, 6-3. The River Hawk’s goals came five different skaters: Andre Lee, Lucas Condotta, Reid Stefanson, Blake Wells and Marek Korencik. The goal from Lee came only four minutes into the first period. River Hawk goalie, Owen Savory, registered 27 total saves on the night.
On the win, Lowell’s head coach Norm Bazin said, “We’re pleased to get a road win at the Whittemore. It’s been tough for us the last few outings here. Five different scorers, a road win, and I thought our goaltending was good. I thought our penalty kill was good, and we chipped in with a shorty. That’s a big deal for us.”

Saturday night’s game was played at the Tsongas Center in front of a large crowd. Being senior night, there was an opening ceremony celebrating Lowell’s senior players including Sam Knoblauch, Stefanson, Jon McDonald,Condotta and Savory.
The second game of the weekend double-header had a final score of 1-0 in favor of Lowell. The lone goal came early in the second period from Carl Berglund. The game started with some back-and-forth chances from both teams. There was a lot of physicality throughout the period. Lowell’s Connor Sodergren was called for hooking about 15 minutes in. About ten seconds later, UNH’s Colton Huard was called for holding. The ensuing four-on-four went without any solid scoring chances from either team. The period ended scoreless with the River Hawks having 11 shots to the Wildcats three.

The goal from Berglund came merely a minute and a half into the second period. It came off of a deflection at the point. About two minutes later, Lowell had too many men on the ice leading to a UNH power play. While UNH had a close chance on the power play, they were ultimately unable to score with Savory making a solid stop. Savory went on to make several more acrobatic saves throughout the period. The period concluded with Lowell having 22 shots and UNH having 13 shots.

The third period began with a lull in shots from both sides. A fight between players broke out about five minutes in. Less than a minute later, Lowell’s Sodergren was called for his second penalty of the night with unsportsmanlike conduct. The power play was killed by Lowell seemingly effortlessly. River Hawk skater Zach Kaiser almost scored on a breakaway later on in the period. The play drew a hooking call on New Hampshire’s Alex Gagne. While Lowell did not score on the power play, they were able to stop the Wildcats from scoring for the rest of the game. UNH pulled their goalie in the final minutes and Lowell almost scored an empty netter. The game ended with Lowell up 1-0.
The River Hawks will look forward to the Hockey East tournament which begins this week. Hopefully for fans, they will be able to continue their winning streak.