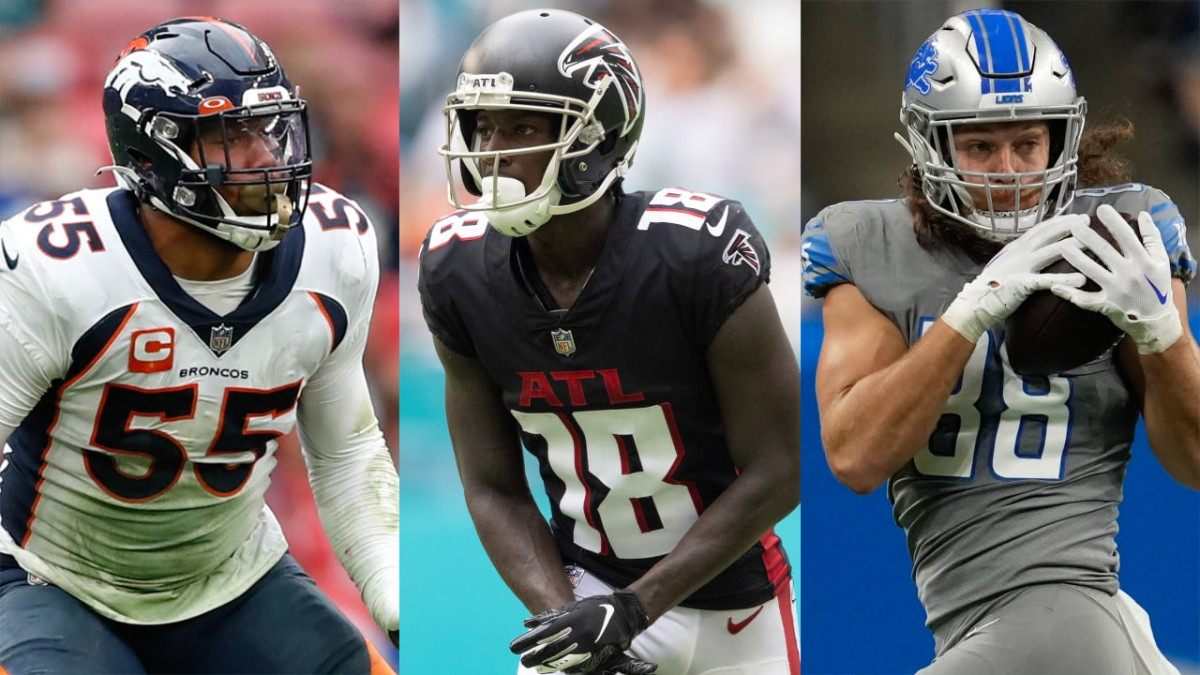 (Photo courtesy of NFL.com) “Linebacker Bradley Chubb is on the left, wide receiver Calvin Ridley is in the middle, and tight end T.J. Hockenson is on the right.”

The 2022 NFL Trade Deadline has come and gone, and for the first time, there was chaos on this glorious day for football fans. So, who can be laughed at, and who can be known as legitimate?

The Bears were clearly tanking and they needed to move some of their key pieces out to build for the future. This time, it was Roquan Smith to go. He joins a Ravens squad in desperate need of a key defensive piece to help their playoff hopes, and they did just that. Sure, the return may have seemed a little steep, but this was necessary for them.

After tight end Irv Smith Jr. got injured, the Vikings were in desperate need of a replacement. It just so happens that Detroit was about to begin yet another rebuild and was gladly willing to give up T.J. Hockenson. Detroit, were picks for someone like him worth it? That is not how tanking works. The condition on the 2024 4th going to Minnesota will turn into a 5th if the Vikings win a playoff game. Sounds easy enough, doesn’t it?

Small deal. There is nothing to be said here.

The fact that Chase Claypool became a distraction in Pittsburgh for both his on-field production (or lack thereof) and off-field antics leads to this trade needing to happen for Pittsburgh. Sure, they needed weapons of their own, but they can finally breathe a breath of fresh air. As for Chicago, good luck.

A low-risk pick-up for Pittsburgh who really didn’t need any help at cornerback, but Jackson could fit nicely if utilized properly. Washington really didn’t gain or lose anything with this deal other than a chance to start a new chapter.

Miami is pushing for the playoffs, and what better way to solidify their defense than by adding a huge name in Bradley Chubb. On top of that, for joining the team, Bradley Chubb got paid. He got a 5-year contract extension worth $110 million with $63.2 million guaranteed. Denver got a premium haul, adding a runner they needed to hopefully give the offense a jolt. Likewise, that 1st-round pick will help them for the future.

Dolphins: A+
Broncos: A+

Wait a minute, the Jaguars really traded for a receiver that is suspended for the entire season? This makes zero sense. But what’s funny about this is Ridley bet against the Jaguars last season, and now he is a Jaguar. The conditions could not be found for the 5th rounder, but as for the 4th, oh boy. It stays a 4th round pick if he is still on the roster, it becomes a 3rd round pick if Ridley himself reaches certain incentives, and it will turn into a 2nd if he is given a contract extension. Smooth, Jacksonville. Smooth.

After trading running back Chase Edmonds earlier in the day, the Dolphins go out and get a replacement for him, and one that needs the chance to break out. Jeff Wilson will get that chance in Miami.

This is just the replacement for Bradley Chubb. Denver just needed to fill the gap for the short term.

The Bills really didn’t need a running back since they already have Devin Singletary, but Nyheim Hines isn’t a bad fit for the team. He did get overtaken by running back Jonathan Taylor in Indianapolis so he needed a new start. The Colts just took Moss as a bonus.