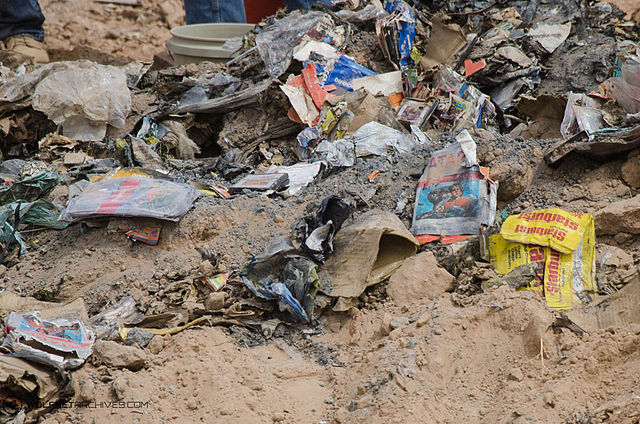 (Photo courtesy of Wikipedia) The Atari Game Dump is one of the most infamous examples of physical games being disposed of en masse.

Physical games are being traded in for digital downloads more and more each year, especially as more consoles get released. How does gaming affect the environment and is there any way to “game green”?

Consoles are not the best thing for the environment. On top of all the plastic and circuit boards that go into building them, there is all the wrapping they are shipped and sold with. These large bulky consoles end up in landfills more and more as people are getting rid of one to get the new product from the same company. But people want to game, and one way they could reduce a carbon footprint would be to keep their old systems or sell them to someone who wants to use them instead of throwing them into the garbage. Having the newest console is what some people live for, but they don’t think about where their old console is ending up.

Brand new or a couple years old, most modern consoles offer digital downloads of games as an alternative to physical copies. Not only does this offer a better impact for the environment, but there is also now open space on gamers’ shelves no longer filled with game cases. According to Somag News, physical games make 23 times more carbon emission than digital downloads that only make 0.17 kilograms of carbon through use of electricity.

Besides the carbon produced while making the physical copies, getting them in the stores produces even more. Huge shipping companies are notorious for their carbon emissions. From their countless shipping trucks and large warehouse facilities, companies like Amazon create tons of carbon each year. Purchasing a physical copy adds plenty of carbon emission from this shipping and consumers driving to the store to purchase the game. Digital downloads cut all these extra vehicles and production emission out of the picture.

Over the past years digital games have been on the rise. So much so that physical games might eventually go extinct, theorizes Logan Plant of IGN. Gamers tend to pick digital downloads over the physical copy for multiple reasons, one of them being guaranteed day-of-release access. With shipping delays and stores running the risk of selling out of their copies, most people are trading in for the ease and safety of digital downloads. Another factor that plays into the way people buy is price. Physical games will tend to go on sale faster and reduce in price as the game gets older. While digital games do have sales, the physical ones might be cheaper overall.

While buying a few physical copies of games each year will not destroy the planet, the change to digital downloads will play a part in sustainability for the Earth. Collectors will likely still collect physical editions, and they will probably never completely disappear, but digital downloads are the more sustainable option on the rise. Game companies are making their strides to be more sustainable, and their consumers can do their part by digitally downloading the games they want directly onto their console.