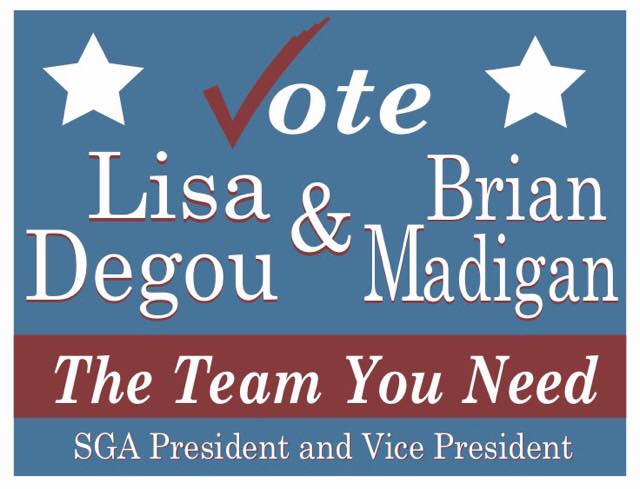 “I thought it was a hard-fought election, between two terrific candidates. I knew whichever ticket took over, they were going to lead the student experience to be more positive. It’s the closest election in UML history, the closest I’ve ever seen. Seeing them conduct their campaigns in such a professional manner despite the stakes was incredibly impressive,” said outgoing SGA President, James Christopher.

After weeks of campaigning and an official debate, the Student Government Association Elections took place online on Tuesday and Wednesday, Mar. 7 and 8.

Along with a host of new Senators, SGA saw the re-election of Lindy Reed as UMass Lowell’s Student Trustee, the election of Kailyn MacNeil as the Senior Class President and a presidential election that came down to the wire. The result; Lisa Degou and Brian Madigan being chosen as president and vice-president for the coming academic year, just nosing out Rob Callahan and Josie Garfield.

Polls came to a close with approximately 1500 ballots cast by the student body. This number may seem small, but each and every candidate cited this election as one of the closest ever, with a fantastic turnout from the students.

The tight presidential race had both candidates thinking long and hard on their platforms. How they reached the student body, and what resonated strongest with them.

Degou expressed her thanks to supports along with an excitement to move forward with the initiatives her campaign had stressed along the way.

“I am most excited to work on my mission to work with the Solution Center to ensure that they have a better relationship with students… I want to create accountability for SGA, inspire and make everyone feel as though they are working towards the same goal,” said Degou, who even expressed a will to work with Callahan, moving forward, on SGA transparency.

Despite the tough, hard-fought loss Callahan’s campaign seemed to, also, resonate incredibly well with the people of UMass Lowell, and he says he intends to move forward with the initiative that seemed the most popular.

“Students seemed very receptive to our platform… I’m excited to work through as much as we can in the remainder of my term as a Senator. We can still try to push through and end the SGA Executive Board stipends, to draft an amendment in an attempt to show that that is something we are not looking to continue,” said Callahan.

The presidential election was not, however, the only race to see a tight contest. The race for Senior Class President was another close one. With three candidates running MacNeil overtook Tyler Farley by just 45 votes.

In the case of Student Trustee the race was a bit more widespread, with incumbent Lindy Reed reclaiming her position with just under 77% of the vote, overtaking transfer student Dylan Lambert. Whom despite being a recent transfer with no prior student government experience brought out a significant voting base.

Reed was honored by the support she received, citing her previous record and large presence on social media and around campus as the driving forces in her victory.

“With a student body as large and spread as the one at UMass Lowell, it’s all about speaking to as many students as possible; gaining their trust… You have to show them who you are and earn every single person’s vote that you can,” said Reed, whose goals in the coming year center around continuing to pursue, “Fighting for affordability. Increasing communication and transparency. And increasing student representation.”

Alongside voting on Student Government Association’s leadership, the student body was also given the opportunity to vote on a binding campus referendum. Should the non-profit, political advocacy group MASSPIRG be allowed to maintain its chapter on campus, funded by $11 out of each student’s user fees. The referendum passed with outstanding community support. For those students who are still in opposition to the group and its message, the fee will be waivable in the coming semester.

With positions filled and decisions made it would seem all is accounted for. However, many of the candidates cited one major problem for next year. The Senate is not filled. There was not enough participation on the ballot for all the SGA Senate seats to be filled. Let alone for there to be competition for the seats.

It was a widely-accepted mission among the candidates to increase involvement and voting in the years to come.

In the coming year SGA is expected to push their Vacancy Packet program. This allows for interested students to fill out the packet and attain a number of signatures, thereby being able to fill an open seat in the Senate; effective immediately.

This will likely be coupled with efforts to improve communication between SGA and the student body.

“I want to reach out more with media platforms like WUML and the Connector. I want us to keep people informed and involved. It was such a close result, and I hope people take a big look into their government and the impact their votes have on this campus,” said Callahan.