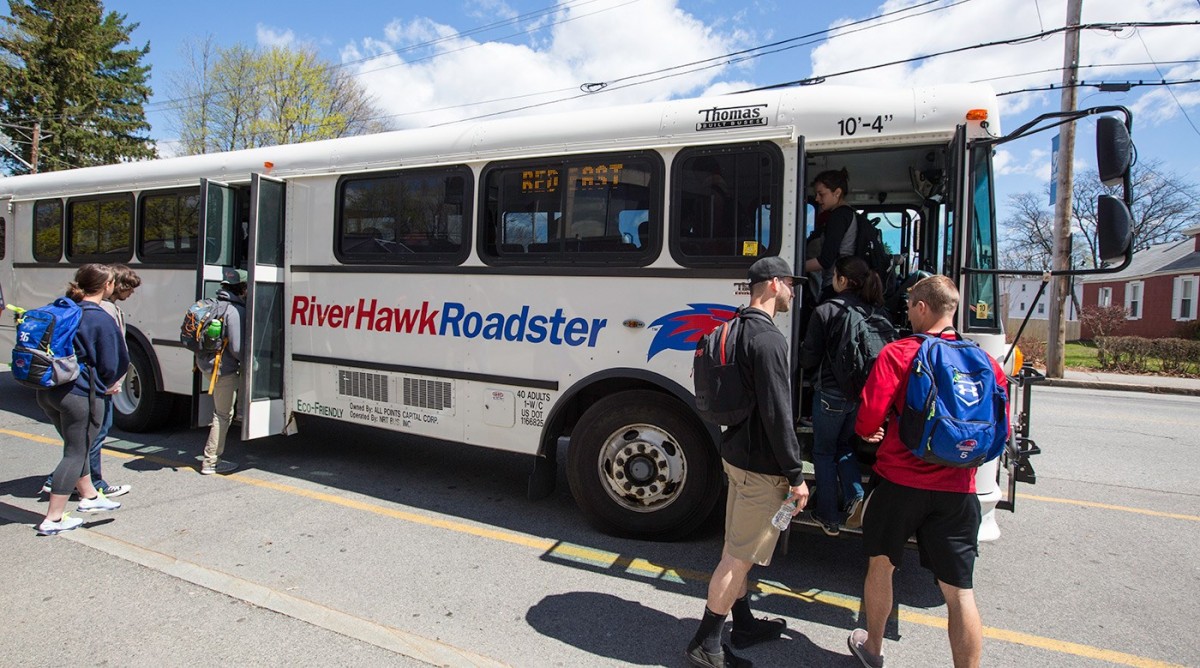 At the tail end of the summer, UMass Lowell was presented with a huge problem: the reconstruction of the Pawtucket Street bridge on East Campus. Although the bridge had fallen into disrepair with several potholes making it difficult to drive over, not being able to use it would interfere with transportation routes. The university realized that not only would standard vehicular traffic needed to be routed away from the construction but the Red Line shuttle bus would as well.

The Administrative Services department, directed by Nick Piscitello, schemed an entirely new route for the Red Line in order to avoid the chaos of reconstruction.

“[The process] has been interesting,” Piscitello said.

The Red Line shuttle now runs directly from East to South Campus, with the East Campus pickup spot being redirected from in front of Fox Hall to the Campus Recreation Center (CRC) traffic circle. From East Campus, the shuttle travels to Father Morissette Boulevard via Aiken Street and directly to South Campus using Broadway Street.

With the East bus stop being situated closer to newer residence halls such as River Hawk Village and University Suites, the CRC circle represented a “win-win” in terms of accessibility for all of the residential students on East Campus, Piscitello said.

The most controversial change in the Red Line’s new route is that it will no longer travel to University Crossing. Piscitello says that this is because the route no longer requires that the shuttle head down Salem Street to go to South Campus.

“Now that it’s going back out towards Father Morissette and going on Aiken, the natural progression towards South is no longer Salem Street,” Piscitello said. “So we had to make the decision, ‘Do we divert it to service University Crossing or do we have it go directly to South?’”

Beyond some initial confusion from returning students, some of whom were unaware that the shuttle would not be stopping at University Crossing anymore, many have embraced the new route.

Amalia Collins, an East Campus resident studying French and Italian, was at first put off by the changes but has grown to like it over the last few weeks since she gets to her classes more quickly.

“I was frustrated when I needed to get to UCrossing and the bus didn’t go there. If I had known ahead of time, I could have gone on a different bus,” she said. “Now that I’ve figured out the new system, it’s fine because it doesn’t have as much as an impact.”

Shaina Gedeon, an exercise science major who lives on East Campus, was also annoyed that the shuttle no longer stopped at University Crossing.

“Everyone usually goes to UCrossing so I think every bus should at least pass by UCrossing and drop anyone that needs to be there,” Gedeon said.

But Gedeon did concede that with the new route changes, her commute to South Campus was quicker. She points out that the benefit to going directly from East to South Campus is that students will get to their classes quicker without needing to worry about a five-minute chunk of time that would have been spent idling at University Crossing.

Brianna Sorenson, a psychology major living on East Campus, believes the changes to be overwhelmingly positive.

“It actually hasn’t been that bad. I feel like every time I walk out of Fox there’s a Red Line shuttle just about there,” she said. “It’s definitely easier and the shuttles run back and forth between East and South much quicker than they have in the past.”

As students acclimate to the changes, they will figure out which shuttles to take to get to their preferred destination. The Blue Line currently services University Crossing, as does the Orange Line, so students who need to go directly there will find their needs accommodated.

However, there are more changes to the transportation routes looming on the horizon.

Piscitello also mentions that sometime “in the near future,” the other bridge on Pawtucket Street which is closer to South Campus will also be closed for reconstruction. This move will limit traffic coming out of South Campus to one lane, thus moving much of that traffic to Broadway Street.

The impact that initiative will have on the new Red Line shuttle route is unclear, but the university has done its due diligence to prepare for that ensuing construction.