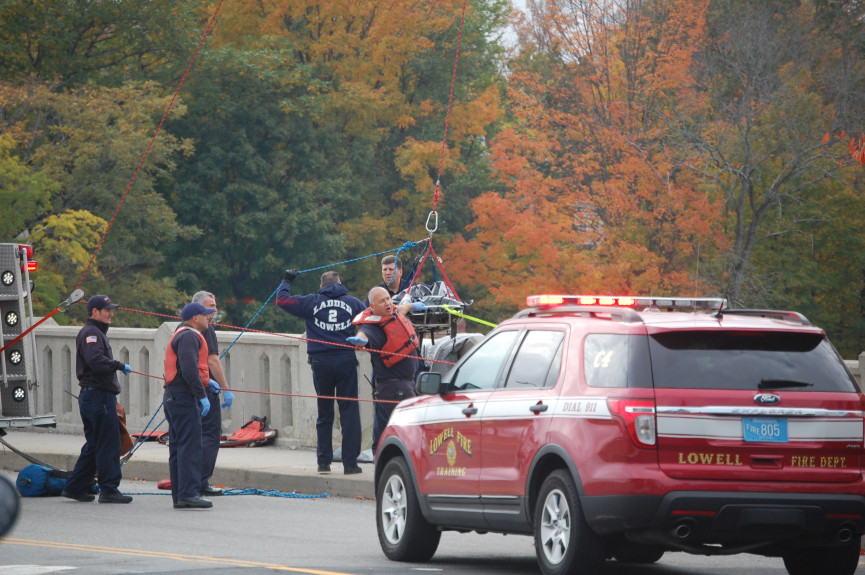 The Lowell Police and Fire departments responded to a report of a woman’s body found below the O’Donnell Bridge early Tuesday morning and arrested a Lowell man in an unrelated case a few hours later on the Richard P. Howe Bridge. Despite the proximity of the two incidents, UMass Lowell and the Lowell Police Department denied any correlation.

The woman, who has not been identified by the Lowell Police, is not believed to be affiliated with the university, according to a statement received by the Connector from UMass Lowell Director of Media Relations, Christine Gillette.

“This [incident] is still under investigation, but our understanding is that this did not involve anyone associated with UMass Lowell, nor did a second incident today,” the statement said.

The woman’s body was recovered around 9:12 a.m. after several onlookers called to report a body in the water.

At 9:12 a.m. today, officers responded to the area of the O’Donnell Bridge for a body in the Merrimack River. Upon arrival, officers found a female body that was recovered with the assistance of the Lowell FD. The Office of the Chief Medical Examiner has accepted jurisdiction.

The Lowell Police department released a statement saying that the incident “does not appear to be a suspicious death” hours after the incident. The Office of the Chief Medical Examiner has accepted jurisdiction, but the identity of the deceased is not expected to be released to the public.

The cause of death has not been officially ruled, other than “trauma,” according to sources close to the situation.

The family of the woman declined to comment to the Connector and asked for privacy during the difficult time.

After arriving at his residence for violating a restraining order and parole, Sylvester eluded police on foot, heading towards the Merrimack River.

Lowell canine officers searched for Sylvester on foot, while helicopters were also deployed.

Police located Sylvester using a GPS tracking device that was installed for his probation in a matter in Superior Court.

Sylvester fled from police at the Richard P. Howe Bridge, at one point jumping into the water. He was eventually arrested.

Sylvester allegedly shouted at UMass Lowell students, “Welcome back to Lowell!” as he was transported by Trinity to Lowell General Hospital’s Saints Campus after he was caught.

Sylvester was arraigned Wednesday in Lowell District Court and charged with strangulation or suffocation, assault and battery on a family or household member and resisting arrest.

A 50-year-old Lowell man who allegedly tried to evade police by jumping into the Merrimack River Tuesday was ordered held without bail on charges of assaulting his former girlfriend. https://t.co/AqG4F6a73Q

The victim recently reported to police that Sylvester repeatedly assaulted her, according to Assistant District Attorney Gregory Galizio.

She told police the defendant bit her on the nose, smashed her phone, punched her in the head, “threw her around like a rag doll,” and choked her until her vision went dark, Galizio said in court.

The victim also reported that Sylvester threatened to kill her and her children if she ended the relationship, Galizio said.

Galizio requested that Sylvester be held without bail pending a dangerousness hearing.

Although UMass Lowell was not directly involved in either event, the university said that students who witness a crime should always report it.

The university also said that students should feel comfortable contacting Counseling Services at any time. Resources are available for all students during the week around the clock.