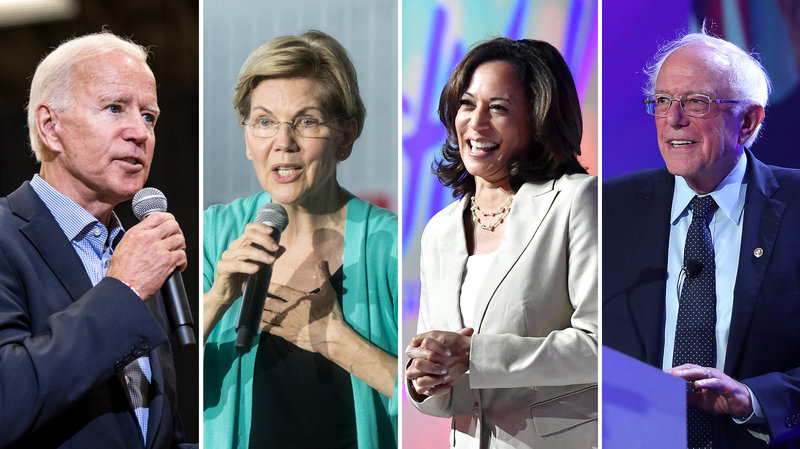 Alongside this massive field of actives, another 10 have already dropped out.

With so many candidates involved, representing an incredibly broad ideological spectrum, the Democratic Party is having internal struggles regarding who runs the party.

While there is a lot of grey area between the two extremes, the winner of the 2020 primary will essentially decide whether the party identifies as the party of moderates or the party of progressives.

And while many candidates exist in the center, the three current frontrunners, RealClearPolitics reports, all exist at an extreme. While Biden is perhaps the most moderate candidate in the race, Warren and Sanders are the two most progressive.

This is not exactly a new picture for the Democratic Party. In the 2016 Democratic presidential primary, there was a struggle for victory between a moderate in former Secretary of State Hillary Clinton and progressive Sanders. I am sure everyone remembers how this ended: Clinton beat Sanders, securing the Democratic nomination and going on to lose the general on Nov. 8.

Now, the moderate wing is once again framed as a safer option that will guide the Democratic Party forward to defeat incumbent Republican President Donald Trump.

This sounds familiar, does it not?

In 2016, electing a moderate, career politician — widely believed to be the most “electable” — lost Democrats the election.

To give it another go with Biden would be absolute lunacy. We have all seen where this path ends.

Sure, maybe Warren or Sanders end up alienating centrist American voters. Their ideas are progressive, and they may, understandably, turn off a chunk of the electorate.

Who is to say the electorate would not come out largely in favor of these ideas, however? We have not yet seen these ideals play out on a national level.

But what we do know is that Clinton did not work out in 2016 — and Biden would be nothing more than a retread. The only notable difference between the two is their gender, and with gender identity being a primary source of excitement for the Clinton campaign, Biden seems all the more vulnerable. He may not have a scandal as prominent as Clinton’s emails yet, but his son Hunter Biden’s dealings with Ukrainian energy firm Burisma Holdings Limited, his questionable public behavior around women and children, his treatment of Anita Hill during Justice Clarence Thomas’ Supreme Court confirmation in the 1990s and number of other controversies suggest Biden is no safe bet himself.

But what about the other candidates?

Following close behind are Buttigieg and Harris, currently polling significantly lower than the three pack-leaders, according to RealClearPolitics.

Neither have been able to achieve double-digit support, averaging 7.1 and 4.3 percent respectively, throughout 2019. Amy Klobuchar is next with 2.6 percent support, followed by Andrew Yang at 2.4 percent, Cory Booker with 2.3 percent and Tulsi Gabbard with 1.6 percent. No other candidate breaks one percent.

And though polls are not definitive, this very much seems like a three-horse race at this point.

It would take a monumental moment for anyone to break through.

Even if one of these candidates does break, however, they are likely also paths to defeat.

Buttigieg struggles to secure the black vote; a historical necessity for Democrats. Harris has been in polling free-fall due to subpar debate performance for weeks, all but entirely withdrawing from the public eye. Klobuchar has never escaped two percent support in the polls, despite strong debate performances and heavy post-debate coverage. Yang has never escaped this range either, despite a passionate base of supporters and an appealing, easy to understand ideological hook. Booker faces the same issues as Klobuchar. And Gabbard fell off the rails in recent weeks, nearing insanity after Clinton accused her of being a Russian asset.

None of these are viable options for victory. Booker or Klobuchar might be able to do it in an environment that noticed them, but they cannot seem to help flying in under the radar.

For someone whose top priority is simply to defeat Trump, the best option in the Democratic primary is clear.

Democrats have already humored moderate politics to best Trump, and it failed.

Now it is time for the party to either try something new or punch at the brick wall until it breaks… or their hands do.

Biden will not beat Trump in 2020. Warren and Sanders might not either, for that matter.

But at least they are not a direct replica of everything that failed in 2016.