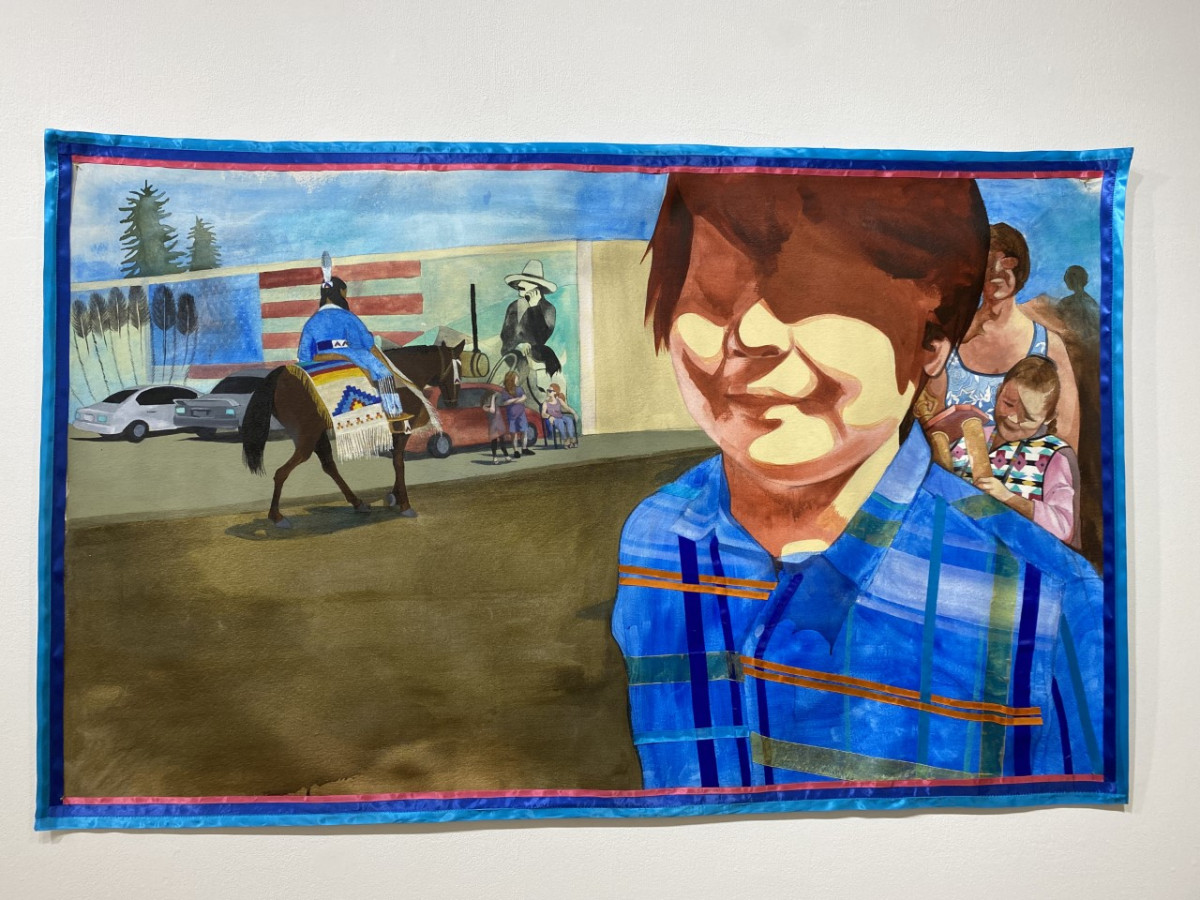 On Tuesday afternoon in Coburn Hall on South Campus, UMass Lowell hosted Chicago based indigenous artist Noelle Garcia for a lecture on her art exhibit Material Truths which is now present in Mahoney Hall’s University Gallery.

Students and faculty alike were in attendance of Garcia’s lecture on what her art means to her, the meanings she hopes to portray, and more. Following the lecture there were questions by students and faculty as well as a reception that same day. Included questions were related to her general work and others about her role as an artist with an indigenous identity.

Present themes she spoke of were in relation to her own indigenous identity as someone from the Klamath, Modoc and Paiute tribes of Oregon and Nevada. Garcia also spoke of her father, her children and life experiences. Some of the sections to her lecture were aptly titled, “For love” and, “For identity.”

As far as qualifications and success goes, Garcia has seen plenty. She attended the School of the Art Institute of Chicago for her Bachelor of Fine Arts and attended the University of Las Vegas Nevada for her Master of Fine Arts.

She has received countless awards and fellowships from a variety of institutions such as the Smithsonian’s National Museum of the American Indian, the Hyde Park Art Center and the Oxbow School to name a select few.

Not only that, but Garcia has also had numerous illustrations and articles in a variety of publications such as American Quarterly, Arts Everywhere Musagetes and even publishing graphic novels as well.

As an educator, an important aspect to Garcia’s life, she has taught at different institutions such as National Louis University in Chicago as an associate professor, the School of Art Institute of Chicago, the Chicago Arts Partnership and also at Cook County Jail.

The exhibit itself which is now open in UMass Lowell’s University Gallery was curated by Kirsten Swenson who is an associate professor of art history here at UMass Lowell.

Material Truths is not merely just the title to the exhibit as it speaks to the variety of materials Garcia uses in the process of making her art.

“Each material has a truth.” as is written in the wall text of the exhibit. Some of those materials include things like beads, canvas, ribbons, buckskin, acrylic paint and more. Each material holds different meaning but has roots in indigenous traditions or art history as well.

The exhibit includes beadworks, multiple instillations, paintings, and much more to tell her own stories through her art. Many of those stories center around her father who was incarcerated for murder, and the annex gallery of the exhibit includes her posthumous research of her father.

“Existence is Resistance” is a particular phrase Garcia made mention of during her lecture on Tuesday afternoon. Being able to bring her artwork for others to see allows the continuation of indigenous stories like her own, which has become exceedingly important in recent times.

The University Gallery is wheelchair accessible and is located in South Campus’ Mahoney Hall and is open Mon-Wed & Friday 10AM-4PM, Thursday 10AM-8PM and Saturday 10AM-2PM and is closed during school breaks.

Students of all majors are highly encouraged to come and view the exhibit in the time that UMass Lowell is honored to be its home.

Material Truths is the first major exhibition of the semester with more to follow and will be in the University Gallery until October 22nd.