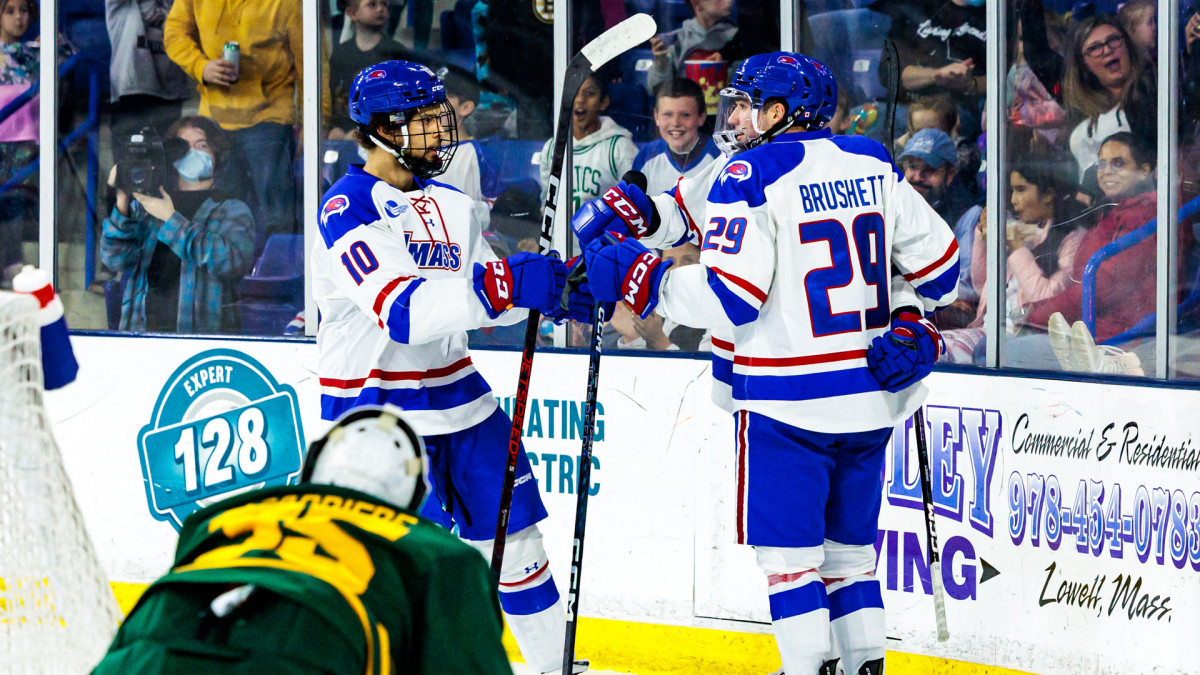 On November 4th and 5th, the no. 17 UMass Lowell River Hawks came away with back-to-back dominant victories over the University of Vermont (UVM) at the Tsongas Center, a rival in the Hockey East Conference.

After splitting the previous series with conference rival Boston University (BU) the weekend before, and splitting the away series against Michigan State two weeks before that, UMass Lowell looked to get their first series sweep of the season as they headed into two back-to-back games at the Tsongas Center.

UVM had just come off three games in which they secured their first two wins and a tie, and after bouncing back from their initial four game losing streak, they looked to defeat the River Hawks and continue their positive trend.

The first game on Friday night started slowly for both teams. The Catamounts and River Hawks both traded blows on the offensive end, and neither team was able to score a goal in the first period.

That would change eight minutes into the second period. UVM goalie Gabe Carriere would lose the puck while catching it along the boards, and the pursuing River Hawks forward Ryan Brushett would knock the puck in front of the wide-open net as forward Scott Truman would charge and take the quick goal.

Up 1-0, the River Hawks continued to carry the momentum for the rest of the game. After grabbing the puck in the neutral zone, the River Hawks would send the pass to forward Jake Stella. Getting the puck just before entering the attacking zone, he would carry it past two Catamounts defenders and score the quick shot over the glove arm of Gabe Carriere, bouncing it in off the top iron and giving the River Hawks a 2-0 lead.

The scoring would not stop there for UMass Lowell. After ending the second period with a River Hawks near-goal that bounced just off the left iron of the goal on a power play, the River Hawks pushed to lay the offensive pressure on the Catamounts.

In the third period, defenseman Isac Jonsson would send the puck to Jake Stella who waited by the side of the goal. Off the pass, he quickly redirected it towards the right iron and past the reaching goaltender, giving the River Hawks their third goal.

The scoring would end later in the third. After taking a pass from the side of the goal, forward Zach Kaiser would send the puck across the ice to the charging defenseman Ben Meehan. His initial shot would bounce off the goalie, but he would quickly get the puck off the deflection and send it just over the diving arm of the UVM goaltender.

UVM, as time expired, would be unable to score a single goal against the River Hawks. The Catamounts were only able to get 11 shots against UMass Lowell, on top of nine penalties which resulted in 18 total penalty minutes against them. The River Hawks, on the other hand, would get 30 shots against UVM as they pushed the offense against their conference rival.

After a dominant win to start the series, the River Hawks looked to continue the momentum the following Saturday night and come away with another win.

The first goal of the game would come from the River Hawks. Forward Zach Kaiser would carry the puck past Catamounts defenseman Joe Leahy and slip the puck in between the shoulders of UVM goalie Oskar Autio, putting the River Hawks up 1-0.

The River Hawks’ final goal would come off a deep shot at the top of the attacking zone. Forward Ryan Brushett would send the puck flying towards the UVM net and put the puck past the goaltender’s reaching arm, giving UMass Lowell a 2-0 lead.

Despite being down, the Catamounts bounced back from the night before and pushed their offense against the River Hawks. UVM was able to get 25 shots on goal versus their 11 the night before, and only had one penalty set against them for the entire game.

Nonetheless, the River Hawks would hold back UVM from scoring and end the game with a shutout 2-0 victory, defeating the Catamounts in both games without allowing them to score a single goal.

River Hawks’ goaltender Henry Welsch completed the shutout with a total of 36 saves combined over both games, completing the dominant series sweep.

Looking ahead, the River Hawks will play conference rival Boston College on Tuesday, November 15th on the road at 7 PM before coming back to the Tsongas Center on Friday to play conference rival UConn to start the two-game series against them. After improving to a 7-3 record on the season, UMass Lowell will look to continue winning and improve on their strong record.