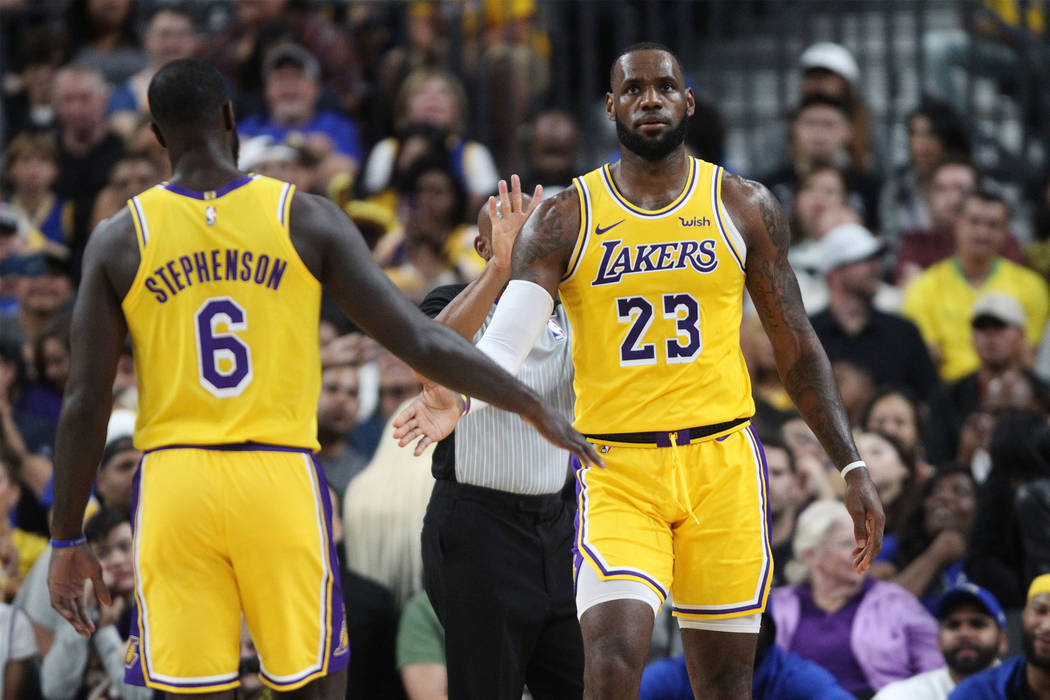 James will look to lead the Lakers to a successful season. (Photo courtesy of Erik Verduzco/Las Vegas Review Journal)

The biggest story from this past National Basketball Association (NBA) offseason was LeBron James signing a four-year, $153.3 million deal with the Los Angeles Lakers. They will be the top story of the NBA for the entire year especially with the myriad of personalities and young players on their team. However, despite the glitz and the glamour that will be at the forefront for the Lakers’ season, the team will fall short of making the NBA playoffs.

This is not an indictment against James. He is still one of the best players in the league. The problem with the Lakers is everyone else on the team. If players like Rajon Rondo, JaVale McGee, Michael Beasley, Kentavious Caldwell-Pope and Lance Stephenson are getting minutes ahead of the younger core of the team, then the Lakers are doomed to fail this season.

This veteran core is quite frankly washed up. Rondo and McGee can make flashy plays from time to time that will make for viral clips on social media, but they’re empty plays that do not help win games against good teams. Beasley, Stephenson and Caldwell-Pope have been playing at least 10 minutes a game. That is 10 too many for players that aren’t positive contributors for a team that has high aspirations. The plus side is that many of these players are on one-year deals, but James is not playing for next year.

Front office executives Earvin “Magic” Johnson and Rob Pelinka need to make a trade to get their team into the playoffs. I believe there are three untouchable players on this roster: James, Ingram and Ball. Young players like Josh Hart and Kyle Kuzma are good, but their ceiling is not any higher than good role players.

We’re only a few games into the season, but it is obvious that the Lakers have a need at the big man position. It does not seem like head coach Luke Walton trusts McGee to play more than 30 minutes a game, and Kuzma and James cannot last a whole season playing center. A lineup with James at center is a lot of fun to watch, but I do not see it being sustainable throughout an 82-game season.

According to Basketball Reference, James had a win share total of 14 last season. This means that James was worth 14 wins for the Cleveland Cavaliers. For reference, this ranked tied for second in the league and ranked behind James Harden who led the league in win shares last season with 15.2.

If we were to use this statistic for the Lakers, who had 35 wins last year, the Lakers would have 49 wins this year. This win total is in line with the Vegas over/under that projects them to have 48 wins. I would take the under and project this current Lakers team winning 45 games just barely missing out for the 8 seed.

The Golden State Warriors, Houston Rockets, Utah Jazz, Denver Nuggets and Oklahoma City Thunder are locks for the playoffs. The teams that I have finishing better than the Lakers and contending for a playoff spot are the Portland Trail Blazers, the New Orleans Pelicans, the San Antonio Spurs, the Minnesota Timberwolves and the Dallas Mavericks.

The Blazers were the 3 seed last year but were swept in the first round of the playoffs. This was not great, but it is worth reminding that the teams seeded 3-8 were only one or two games apart from one another.

It did not inspire a lot of confidence in fans when the Blazers essentially brought back the same team from last year. However, I really like the additions of Nik Stauskas and Seth Curry, and Zach Collins has shown some nice play as a back-up big man.

The Pelicans lost DeMarcus Cousins and Rondo in the offseason, but they still have Anthony Davis who I see having a MVP-caliber season. Jrue Holiday is a good two-way guard, and I think Elfrid Payton and Julius Randle have the skill sets that can fill in better than Cousins and Rondo.

The Spurs and head coach Gregg Popovich are the New England Patriots and Bill Belichick of the NBA. You can’t count them out until you see them fail. If anyone can make a team of DeMar DeRozan, LaMarcus Aldridge, Rudy Gay and Pau Gasol work, it’s Pop.

If Jimmy Butler is traded, then the Timberwolves aren’t making the playoffs. He really is that good even though he may not be the nicest person in the world.

The Mavs are a good sleeper team especially if rookie Luka Doncic can unlock the potential of this roster that has DeAndre Jordan, Dennis Smith Jr. and Wesley Matthews.

Until the Lakers make major changes, they will have a fun season but will miss the playoffs.