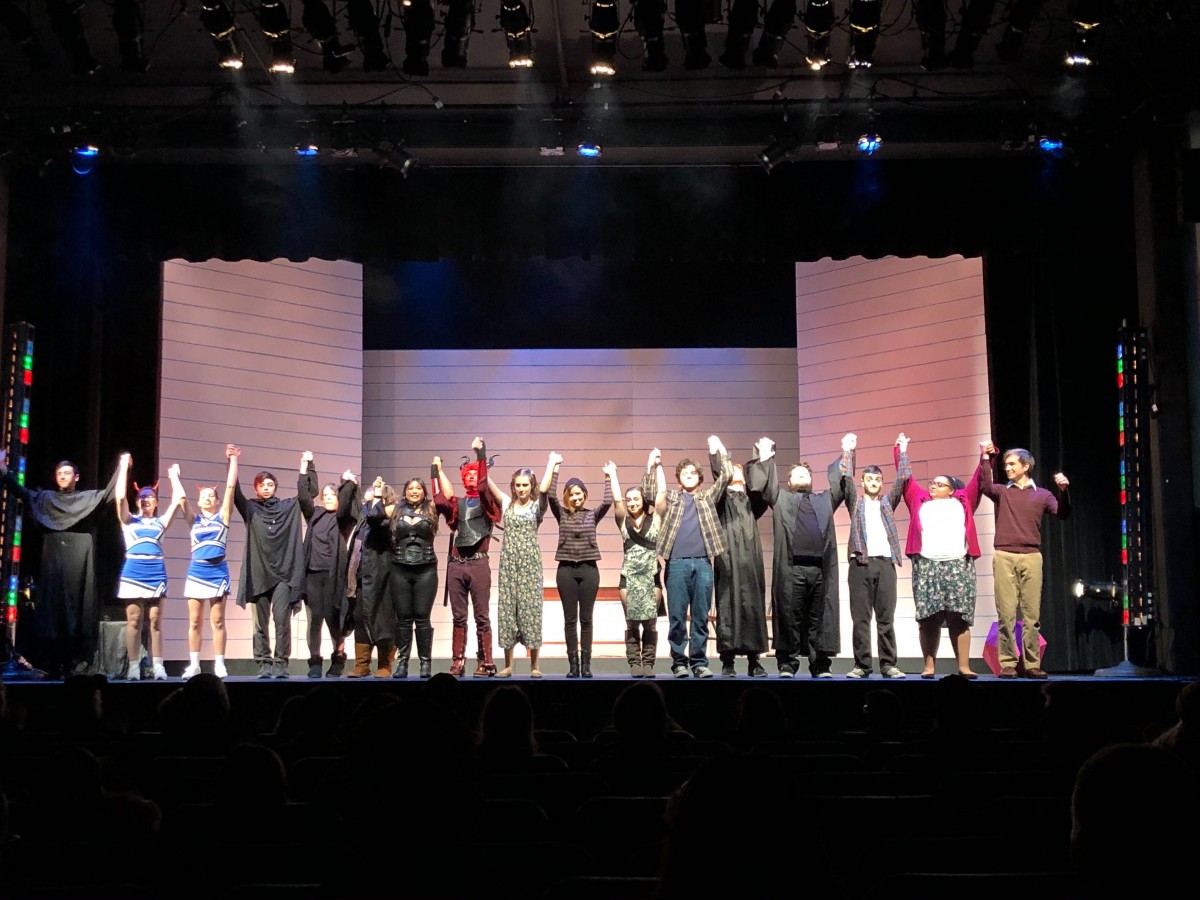 “She Kills Monsters” debuted in 2011 at the Flea Theater in New York. (Photo courtesy of Kaliisha Cole/Connector)

The Off-Broadway Players held their fall production of “She Kills Monsters” written by Qui Nguyen at the Comely-Lane Theatre. The production, which ran from November 20–24, is a comedic, yet dark fantasy that follows a high school teacher, Agnes Evans (Greta Hall), as she battles with the loss of her 15-year old sister, Tilly.

Tilly found sanctuary and comfort within the confines of “Dungeons and Dragons” where she had an overly sexualized, demon girlfriend and was a well-known Paladin. Agnes discovers Tilly’s “Dungeons and Dragons” book and tries it, growing immersed in the story where she discovers things about her sister that she never knew before. The play was a humor-filled drama that will keep the audience laughing with dirty jokes and spiteful lines. Throughout the beginning of the play, the audience was taken through an introduction into Agnes’ life leading up to the car crash that killed her parents and little sister. As Agnes delves deeper into Tilly’s fantasy world, she is confused and eventually comes to learn that the game is a part of Tilly and brought her closer to her sister in a way that she was never able to before.

One of the many positive aspects of this play were the combat and stage direction. The combat in this play was spectacular and the choreographer did an amazing job. Some of the scenes that had combat were so well done that it looked like someone was actually stabbed with a sword or that their neck was actually snapped. There was a very fascinating scene that was portrayed in slow motion. This scene showed the ability of some of the actors, especially the student who played Kaliope (Raylene Rocheleau) whose agility and flexibility were such a pleasant surprise. Another amazing part of the play was with the technical design. The people who were in charge of technology for the play did a fantastic job from the color transitions, the background images of forests or flames and with the sound effects. Lastly, the costumes were extremely well done, especially with the costume for Orcus’ and Lilith’s character paired together with sparkly and bold makeup. Elizabeth Rocha and the design and makeup team did a great job embodying what demon creatures should look like.

The cast was filled with energy and seemed to get along well together. The only thing that the play felt lacking in was with regards to the emotion of some of the cast members. It would have felt more complete if some of the actors added more emotion to engage the audience at a deeper level. The play is a comedy of a sort which might have been the cause of a lack of deep emotion, but with the seriousness of certain scenes the actors should have tapped into that sadness or anger just a tad more. The audience has to feel what the characters feel in order to be consumed by the story.

Overall, this play hit so many marks of excellence that an applause should be given to the director, J.T. Turner, for the work he has put into it along with crew who helped put the finishing touches on it. This play was like an homage to nerd culture and a story of appreciation for those who find solace within epic, monster slaying games or in any form of pop culture.

When discussing the play with Off-Broadway Players President, Devin Provencher, he said, “The play is meant to teach people to appreciate who they are.”

It could not deem truer that the play showed that those who are unhappy with who they are should learn to accept themselves because they have the potential to be strong, demon slaying and beautiful fighters.