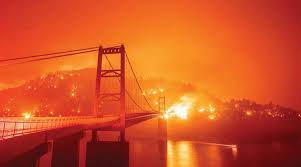 From last year’s wildfires to the most recent winter weather in Texas, it is getting hard to ignore the impacts of climate change. If the news makes you anxious or scared for the future, you are not alone. As climate change and the projections for our future grow seem to grow more and more urgent by the day, nearly 62% of Americans identify as being concerned or very worried about global warming according to a survey from a Yale program on climate communication.

After hearing from her students how climate change was impacting them, Jennifer Atkinson, an associate professor at the University of Washington and the host of the podcast ‘Facing it,” created a seminar called “Climate Anxiety and Eco-Grief” to help her students deal with those feelings of doom and redirect them into action. UMass Lowell’s Climate Change Initiative (CCI) invited Atkinson to speak on the topic on Monday, Feb 22.

In 2017 the American Psychological Association defined the term Eco-anxiety as a chronic fear of environmental doom. Atkinson says recorded symptoms range from mild worry and intrusive thoughts to substance abuse and chronic depression. The dominant emotion can vary for everyone.

Those impacted by Eco-anxiety come from all kinds of socio-economic backgrounds, but the larger impacts are seen in poorer communities, in particular black, indigenous and communities of color. These are the communities that are most likely to be impacted by climate disasters and not be given or have access to the resources to recover from these events.

In her course and on her podcast, “facing it,” which covers this topic as well, Atkins breaks down navigating Eco-anxiety and climate grief into actionable steps.

Atkinson started by recommending that people start to recognize and accept the feelings that the news surrounding the climate evokes. She said there is a mobilizing potential behind these emotions and when people read and hear the news stories with what she calls doomer headlines, things like ‘decarbonize in ten years or face collapse,” it feeds into people’s paralysis and makes them more likely to deny or repress their emotions, leading to future helplessness and inaction.

“I say that it’s dangerous, especially these kinds of headlines, because they lead the public to assume that it already too late and there is nothing we can do now,” said Atkinson. “Which isn’t true. Even if we overshoot our target of 1.5 degrees warming, which it’s likely we will, 1.8 is still way better than 2 degrees, and 2 degrees is still significantly less catastrophic than 2.5 or three.”

When faced with these emotions like grief and depression, Atkinson recommends people reframe the way that they view these emotions from a bad thing that needs to be fixed to a moral emotion. For example, Atkinson said that grief is a function of deep attachment and love with the world, grief can be a political act challenging the desire to sidestep and ignore the loss that communities and species are facing, Greif forces us to look at and see structural injustice and climate injustices, and Greif is the bases for the sustained and continued response to Climate change.

“Grief is by definition a function of love while hope is not. You can feel hope without love,” said Atkinson.  “Like I hope there is a parking spot open, or I hope my sports team wins, but you cannot feel grief without love. That is what grief is, and I think love and grief are far more powerful at motivating us to fight than any other effect. There is just no limit to protecting the things we love even if we don’t think that we have hope.”

Atkinson recommends that people avoid the trap of hope. She said hope can often be a mechanism of deferring action into the future or on to other people. She said the debate is a bit more complex than this because there are so many types of hope, but we have to remember that hope is not the end game, getting collective action is.

“If you need reassurance of the probability of your desired outcome before you commit to acting, you have put yourself on a very flimsy foundation because as individuals the outcome of global emissions is really out of our control, and if that is our only purpose and emissions do keep rising, or whatever metric you have set for yourself, then we feel defeated and give up. But if we act out of our values and out of a sense of obligation and justice, if we act because we think it is right, then that can never be taken away. Even when things seem hopeless.”

Instead, of hope when people are feeling Eco-anxiety or grief, she recommends that they practice gratitude, get outside, practice self-care, and get engaged.

“Hope to some extent is about the future. Whereas gratitude is about the present, so it is about being present in the particular moment,” said Atkinson. “I think gratitude is important because A.) it helps us maintain a sense of well-being so we can keep doing this for our lifetimes . . . It is also about counteracting this compulsion to consume. That our addiction to materialism is in part- In part! – a function of our failure to just have gratitude for what is already so overflowing in our lives, in particular, of course, I am talking to an audience of more educated North American students and colleges.”