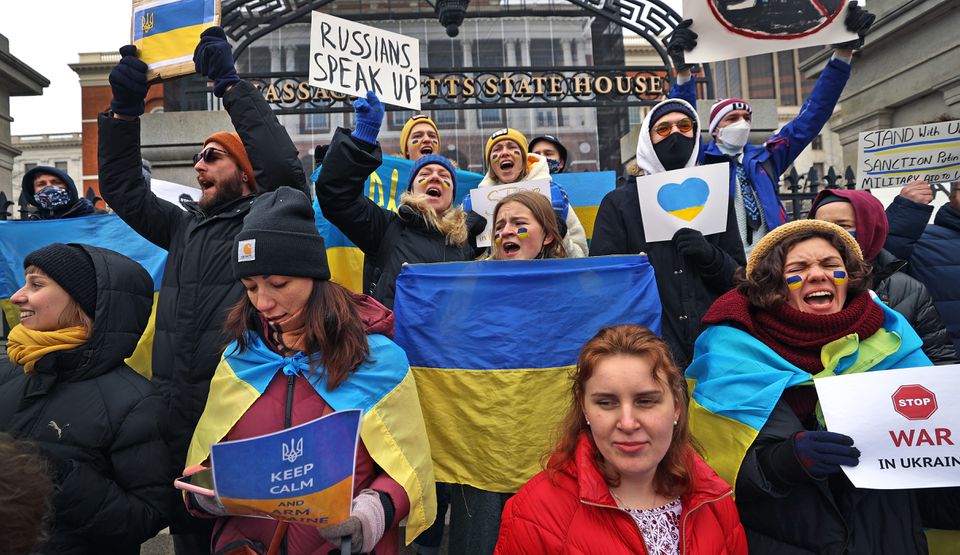 (Photo courtesy of David L. Ryan/The Boston Globe) People gather in front of the Massachusetts State House in solidarity with Ukraine in response to Russia’s invasion.

On March 1, six members of the political science department addressed questions and concerns about the invasion of Ukraine to a packed auditorium. The panel, organized quickly following the onset of conflict the week prior, was attended by faculty from a range of departments. Dr. Jarrod Hayes, a geopolitics and security scholar, managed the panel. Each panelist delivered a three-minute speech on what they considered important factors of the ongoing conflict and humanitarian disaster in Europe.

Dr. Angelica Duran-Martinez, who studies political and criminal violence in Latin America, discussed western powers’ sanctions as the best current approach, expressing that current sanctions seem sufficiently costly to pressure Russia. However, she was unsure how much support Vladimir Putin has and how sanctions would be received by the Russian people–variables that make it unclear for now how successful sanctions will be against Putin.

Dr. Minhyung Joo, a scholar of civil conflict, rebel groups and peace, discussed the separatist movements in the Donetsk and Luhansk oblasts of eastern Ukraine, groups that support Russia and seek to prevent Ukrainian alignment with the west. Founded after the 2014 Euromaidan movement, these groups may spoil future peace efforts.

Dr. Christopher Linebarger, who studies terrorism, military intervention and political violence, discussed what he thinks a likely course of the conflict: Russia is overconfident in a speedy victory and, as such, fights inefficiently in the face of tougher than expected resistance, positing that the Russian army would likely increasingly target civilian areas, perhaps to undermine Ukrainian resolve.

If Russia begins taking cities, Linebarger expects Ukraine to begin asymmetric warfare, engaging in guerilla insurgency to make the Russian occupation suffer, likely dramatically increasing the human cost of the war. Lastly, he made the grim comparison to Syria, suggesting Ukraine may similarly turn into a drawn out protracted conflict.

Second, enemies of the western world, Russia, China, Iran, North Korea and non-state actors like Islamist groups, are uniting. He pointed to the alliance between Russia and China announced during the Olympics to indicate more attention should be paid to these nations’ movements.

Third, American confidence in its own cultural values is falling when Russo-Chinese confidence is rising, so Russia was caught off guard by the west’s swift reaction to sanctions.

Dr. Jenifer Whitten-Woodring, scholar on media freedom and human rights, claimed Ukraine is currently winning the information war against Russia, and Putin has lost control of the narrative on social media. While traditional forms of communication, like television, might be easier subjugated, Russia has been outflanked by Ukraine on social media. Putin underestimated President Zelenskyy’s social media skills and western citizens’ ability to apply pressure on their leaders to impose harsh sanctions. Similarly, protests in Russia, which were made illegal Friday, indicate Putin overestimated his control of information domestically.

Hayes finished the speeches examining how the war threatens the post-war international system. The invasion has the potential to seriously damage the concept of sovereignty and if unpunished, could cause cascading cracks in the fabric of international law. Additionally, Russia’s move to nuclear alert makes the concept of deterrence frail, as the U.S. is no longer on the same page as Russia and China regarding how to deal with nuclear escalation. Similarly, the U.S. is ill-prepared for a renewed imperialist Russia and Taiwan-hungry China.

Panelists denounced the theory that Russia was motivated by a fear of NATO expansion, as NATO is not a beast capable of offensive action, and Russia was previously part of a joint council with the organization. Putin’s rambling speech the week before the invasion invented a new history for Ukraine, indicating a much more imperialist motive.

Concerning Putin’s support and sanctions’ impact, panelists said the Russian government’s ability to evade sanctions on the Ruble seem slim, though, long term, may bring China and Russia closer. Support from oligarchs is more important for Putin than public support, indicating a need for directed sanctions against Russian elites.

On civilians caught in the conflict, panelists condemned reports of racial discrimination against refugees on the Ukrainian border, expecting the fault to be with anti-immigrant forces in eastern European states. Panelists also expressed concern that civilians defending Ukraine will be subjected to more extreme violence.

Finally, discussing diplomacy, panelists think a summit between Putin and President Biden, or other western leaders, would have little effect. If Putin is committed, there is no compromise that will allow international norms to stay in place.